Not to be confused with Loudmouth.

Equipped with the latest in stun tech, Loudmouth Bot's always got something to say.

3 Min.
Shouts loudly, stunning plants in nearby proximity.
Loudmouth Bot is a Spawnable Zombie Bot in both Plants vs. Zombies: Garden Warfare 2 and Plants vs. Zombies: Battle for Neighborville which can be built in Graveyard Ops, Backyard Battleground, and Herbal Assault.

It emits a close-range sonic blast in front of it that damages and stuns plants it hits. Its function interval lasts for 10 seconds. It is the zombie counterpart of Goop-shroom. Its attack is named Loud Noises, deals 25 damage, and can pierce Citron's Peel Shield.

A variant of the Loudmouth Bot called the Loudhare Bot was created to celebrate the Springening event.

MEDIUM RANGE: STUN
Equipped with the latest in stun tech, Loudmouth Bot's always got something to say.

MEDIUM RANGE: STUN
Not sure what sound rabbits make? Come a little closer.

Not only does Loudmouth Bot stun plants, but it shoves them slightly away so try to build this bot close to Graveyards or Gardens in Gnome Bomb to keep plants from planting or defusing the gnome.

It doesn't do much damage, so try to place it in a place that will surprise plants, but not easily able to be shot at from a distance.

On most maps, the bot pads are not close enough to the Suburbination zones to be useful, so build something further range. 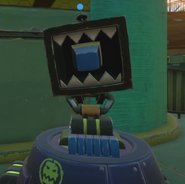 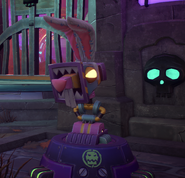