Drops in past defenses.

(can blow him away while hanging)

Lost City - Day 2
He faked his pilot's license and figured nobody would notice. But they did.
Lost Pilot Zombie is the fifth zombie encountered in Lost City in Plants vs. Zombies 2. He drops in on a parachute and hangs above the ground for a while. After a few seconds or after using Blover or Hurrikale, he will drop down and walk forward. He will not drop down if he is eating a plant. He only appears in groups during the "Parachute Rain!" ambush.

Drops in past defenses.

He faked his pilot's license and figured nobody would notice. But they did.

This zombie is Lost City's ambush zombie, and will only appear on the lawn during the ambush "Parachute Rain!" He has a little bit more health than a Basic Zombie, but only by 130 damage per shot. They are immune to Blover and Hurrikale's instant kill ability, despite appearing to be airborne (attempting to use one will simply cause the Lost Pilot Zombie to fall from his parachute instantly). They are annoying alone, but when they drop in large numbers, they can easily crowd your defenses, drawing fire away from more dangerous zombies. The best way to defeat them is to simply have a strong offense. Plants that can attack through multiple zombies, such as Bloomerang, Laser Bean, Fume-shroom, and A.K.E.E. are useful for quickly clearing the lawn of Lost Pilot Zombies, as well as defending against other Lost City zombies. This zombie can eat plants even when still in the air, so planting Wall-nuts or Endurians underneath them can stall them and give your other plants a chance to attack them. Don't continuously plant plants underneath him as they will get eaten, resulting in a waste of sun.

Using Chard Guard is a bad idea against him due to strange hitbox issues as Lost Pilot Zombie will keep eating him even on ground without Chard Guard pushing unless another type of zombie comes.

Lost Pilot Zombies will always appear when Dr. Zomboss calls a plane to attack. They appear between 3, 4 or 5 column and can be a problem if you do not have a well-prepared defense. Lost Pilot Zombies are the closest zombies to activate a Boulder Trap Tile (they even can get above the trap tile) and eliminate your defenses with ease. The number of Lost Pilot Zombies who can appear for the plane is varied and depends on the life of Zombot Aerostatic Gondola at that time.

When level 1, do the same strategies as listed above. However, if this is leveled up, he can cause extreme dents in your defense. Because of this, using leveled up plants is the only option.

Another SD Lost Pilot Zombie with his parachute 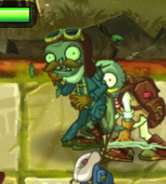 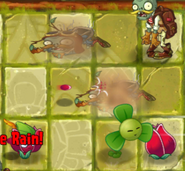 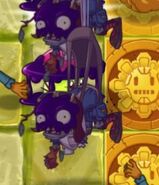 Poisoned Lost Pilot Zombies
Add a photo to this gallery 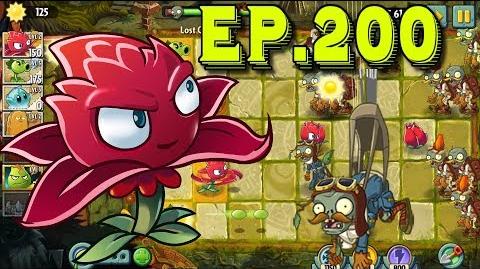 Retrieved from "https://plantsvszombies.fandom.com/wiki/Lost_Pilot_Zombie?oldid=2363443"
Community content is available under CC-BY-SA unless otherwise noted.