Opens a secret door to allow zombies to travel quickly

Opens a secret door to allow zombies to travel quickly

Lost Guide Zombie got this job not because of his intelligence, but because of the map in his hand. So he seriously thanks his father, who went bankrupt because he liked to search for antique objects.

Lost Guide Zombie (失落向导僵尸; pinyin: shīluò xiàngdǎo jiāngshī) is a zombie encountered in Lost City in the Chinese version of Plants vs. Zombies 2. He uses a metal detector to find a secret door underground, which he will then enter along with any zombie on the same square as him and come out of the exit. The exit is located four squares away from the entrance. Jackfruit can block the tunnel opened by this zombie.

This is a pretty dangerous zombie. This zombie will dig a tunnel four squares away from the fourth column and any zombie that is in the same square will appear there along with him. Once he reaches the exit, he will do severe damage to the plants at the backside of the lawn and while his health is high enough, if a Conehead Adventurer Zombie or a Buckethead Adventurer Zombie enters the tunnel along with him will cause huge trouble. Jackfruits will block the tunnel, but since this zombie is fast enough to dig a tunnel and enter it before the player can plant the Jackfruit and after the zombies exit the tunnel the tunnel disappears instantly, it will provide little help. The best way to deal with this annoying threat is to just defeat it instantly with an instant-kill plant, or stall while dealing decent damage to him once he appears, as he only has the health of a Basic Zombie. Backwards shooting plants in the fourth to eighth column are recommended to deal with zombies that are exiting the tunnel. Additionally, if a Gold Tile appears in the fourth column and should the player decide to plant there, they should watch out for this zombie as Gold Tiles cannot be reused after the plant on it is lost. The player should also plant sun-producing plants in the fifth or sixth column and offensive plants in the hindmost columns, and defensive plants in the fourth column so zombies cannot enter. Also, zombies that exit the tunnels are invincible for a second or two, so wait before you use Plant Food. The Imp Porter can also set up his camp on the tunnels, making all zombies that spawn go into the tunnel, instantly being transferred to the other side. 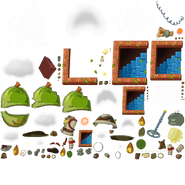 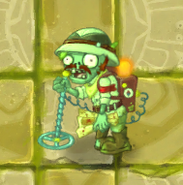 Lost Guide Zombie trying to go inside the tunnel 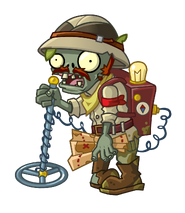 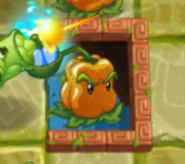 Pepper-pult on a tunnel exit

Retrieved from "https://plantsvszombies.fandom.com/wiki/Lost_Guide_Zombie?oldid=2338142"
Community content is available under CC-BY-SA unless otherwise noted.