Fusion: A zombie played on this gets +2

Lost Colosseum is a triassic rare zombie card in Plants vs. Zombies Heroes, and a member of the

Frenzy trait, and its Fusion ability gives the zombie played on it +2

It's based on an Amphitheater, an open-air venue used for entertainment, performances, and sports.

Its name is a combination of "lost" and "Colosseum", also known as the Flavian Amphitheatre, an oval amphitheater in the center of the city of Rome, Italy.

By itself this is kind of like a Vimpire without an ability, so use it as you would a Vimpire. Its real strength comes in its Fusion ability, which can boost zombies to insane levels. Good zombies to fuse with this would be ones with high health, like Quickdraw Con Man, high attack, like Fire Rooster, the

Deadly trait, like Smelly Zombie, or an ability that activates when it hits the plant hero, like Tomb Raiser Zombie. This is particularly deadly with the Overstuffed Zombie, who can use the

Frenzy trait to smash through opposing defenses while healing itself. However, only The Smash can do this normally.

Because of its sports tribe, it can get boosts from Team Mascot and be protected by Zombie Coach, although this is not recommended since it it probably of more use to you when fused with another zombie. Ancient Vimpire can boost this whenever it destroys a plant, although it is better to fuse this with stronger zombies instead and only The Smash can do this normally.

By itself, this card is quite easy to deal with. The best way to dispose of it is tricks like Berry Blast or Whack-a-Zombie. A plant with 3

can also destroy this easily on the turn it is played. If your opponent has already fused on top of it, then tricks like Shamrocket or Squash can take out the newly boosted zombie.

Lost Colosseum's statistics after being Conjured by Eureka

Lost Colosseum's statistics after being Conjured by Escape through Time 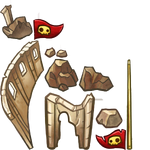 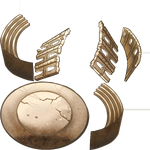 Gosh, I can grow leaves!
This article is a stub. Please help us expand it, or the zombies will eat your brains!
Retrieved from "https://plantsvszombies.fandom.com/wiki/Lost_Colosseum?oldid=1958143"
Community content is available under CC-BY-SA unless otherwise noted.