Fusion: A Zombie played on this gets +2

Frenzy.
The Legend of the Mustache Monuments led Zombie explorers to uncover ancient colosseums.
Lost Colosseum is a triassic rare zombie card in Plants vs. Zombies Heroes, and a member of the

Frenzy trait, and its Fusion ability gives the zombie played on it +2

It is based on an amphitheater, an open-air venue used for entertainment, performances, and sports. Specifically, it resembles the Colizeum map in Plants vs. Zombies: Garden Warfare 2.

Its name is a combination of "lost," and "Colosseum", also known as the Flavian Amphitheater, an oval amphitheater in the center of the city of Rome, Italy, the real-life structure it is based on.

The Legend of the Mustache Monumets lead Zombies explorers to uncover ancient colosseums.

By itself, this is kind of like a Vimpire without the ability, so it is underwhelming as a fighter. However, its real strength comes in its Fusion ability, which can boost zombies to an insane level.

Since it gives the zombie both strength and health, Lost Colosseum is good with any zombie. It can make a bulky zombie like Quickdraw Con Man even bulkier, and glass cannons like Fire Rooster hit harder. The

Frenzy trait is equally as good as the stat boost, but it works especially well with the previously mentioned glass cannons, Ancient Vimpire, and zombies with offensive traits like

Anti-Hero or an ability that activates when it hurts your opponent. This is also particularly useful for Overstuffed Zombie, who can use the newly gained

Frenzy trait to destroy any plants in his way and hurt your opponent without taking damage. However, only The Smash can do this normally.

Another positive of Lost Colosseum is that it is the most efficient card in the Hearty class in terms of boosting a single zombie. However, if you want to boost multiple zombies at once and have no need for the

Frenzy trait, Primeval Yeti and Monster Mash are better, although they are more expensive. You could also use Going Viral since it costs the same but covers everything with frenzy at the cost of a reduced stat boost.

While its history tribe doesn't benefit except making it Conjurable by Escape through Time, its sports tribe benefits it a lot more. It can get boosts from Team Mascot and be protected by Zombie Coach, although using Lost Colosseum to fight is not recommended unless you want to improve its survivability. It also helps if Lost Colosseum is Conjured by Cosmic Sports Star, as you can spend less brains to Fuse a zombie. Synergy with Ancient Vimpire is also possible since it gives any zombie played on it the Frenzy Trait. Additionally, it can also activate Chum Champion's evolution ability and make him a much bigger threat.

By itself, this card is quite easy to deal with. The best way to dispose of it is to play tricks like Berry Blast or Whack-a-Zombie. A plant with 3

can also destroy this easily on the turn it is played. If your opponent has already Fused on top of it, then instant-kills like Shamrocket or Squash can take out the newly boosted zombie. 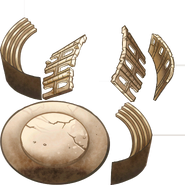 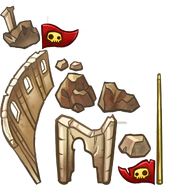 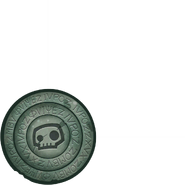 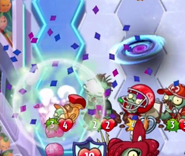 The animation played when Lost Colosseum is Fused 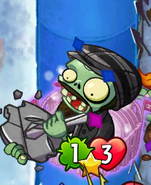 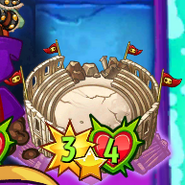 Lost Colosseum while Pecanolith is on the field 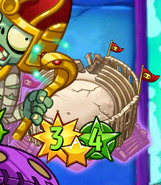 Lost Colosseum with a star icon on its health 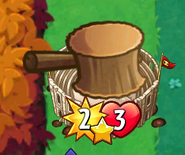 Whack-a-Zombie being used on Lost Colosseum 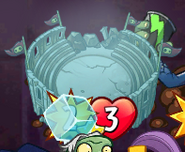