A money bag
Lost City - Day 8 was the eighth level of Lost City in the Chinese version of Plants vs. Zombies 2. It was a Dark Stormy Night level. 15 Gold Tiles were present on the lawn, all of them placed at the first three columns from the end of the lawn. When this level was finished for the first time, the player got a star.

The gimmick for this level was similar to that of Level 4-10 in Plants vs. Zombies, as the screen was covered in darkness and was only illuminated by lightning strikes for several seconds before darkening.

However, the main thing that differed from the mentioned level was that the lightning strikes that illuminated the screen were able to strike random plants and zombies, instantly killing them. 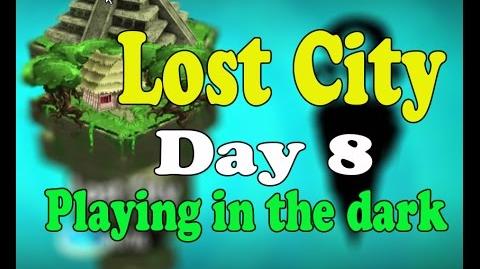