Same as before
Lost City - Day 29 is the 29th level of Lost City in Plants vs. Zombies 2. There are five Gold Tiles in this level: one is in the fourth column, two are in the fifth, and two more in the sixth. After completing this level, the player receives a money bag.

This strategy can beat the level without premium content, using Plant Food, and losing any lawn mowers.

When the first two batches of Bug Zombies come in, delay them as long as possible and then kill them with Blover (keep an eye out for the Conehead Bug Zombie in the middle). Fill up the back column with Winter Melons as you build your sun supply, using them to counter Excavator Zombies. You can dump Sun-shrooms and Sunflowers to delay a rogue Excavator Zombie, or use a Cherry Bomb. If they throw a Tall-nut back, it will just delay the zombies behind them.

By the time you have all five Winter Melons ready in the back column, the Gargantuars will arrive and be easily destroyed by Winter Melons, Cherry Bombs, and Rotobagas (especially if you fill up the center lanes in between the Gold Tiles, flanking the Gargantuars). Be sure to use Blover immediately to kill off any Bug Zombies, and especially Relic Hunter Zombies.

If you use Plant Food with this strategy, the Winter Melon's power will make short work of the level, especially the Turquoise Skull Zombies. 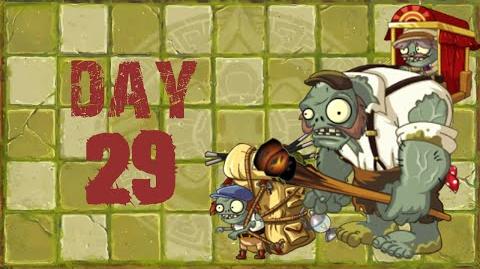 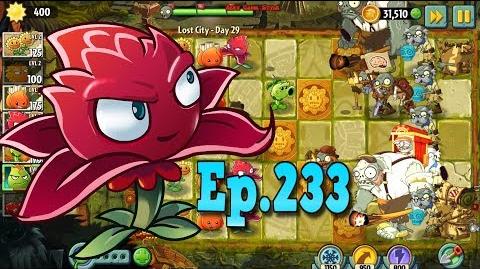 Retrieved from "https://plantsvszombies.fandom.com/wiki/Lost_City_-_Day_29?oldid=2266021"
Community content is available under CC-BY-SA unless otherwise noted.