Crazy Dave: Woah! Welcome to the jungle!
Penny: User Dave, this is no ordinary jungle. A scan of my records indicates that this is the fabled Lost City. Historical texts state that the Sun was worshipped here. Resources should be plentiful. I suggest that we try planting on the Gold Tiles that we find here. They should continuously generate sun as long as they have plants on them.
Crazy Dave: Lost City? This is it Penny! We've found it! Where else would I find my lost taco, except in a Lost City?
Penny: Your continued fixation defies all logic or reason, User Dave.

There are a lot of strategies since this is only the first level. Other players may not think of this, but the player can use the only the Gold Tiles only for sun production, and then the tiles surrounding the Gold Tiles can be used for dealing damage to the zombies.

Place Plants as shown below:

Use Iceberg Lettuce to stall zombies for Celery Stalkers.

F = the plant you are using to fire things

Note: this strategy does not use sun-producing plants because of the gold tiles.

In the beginning, place a Kernel-pult on any of the Gold Tiles. Then put a Potato Mine to take out the two zombies. Finish your row of Kernel-pults on the first column. After that, plant Primal Peashooters on the second column. When you have finished the second column, keep on planting Primal Peashooters on the third and fourth column. Finally, plant a column of Wall-nuts on the fifth column.

This strategy, once implemented, will be a zombie killing machine.

Kill the first few zombies with Celery Stalkers, Potato Mine or its primal form, and Chili Bean. Stall them if necessary with nuts. Build up 2 columns of Twin Sunflowers in the meantime, then start planting melons. You should have 1 column of Winter Melons and 1 column of Melon-pults by the near end of the level. Enjoy!

Spikes Up, Heads Down

This strategy uses Spikeweed and Spikerock as the main attacking plants.

Kill the first few zombies with the chosen instant-kill plants, while building up your sun producers on Gold Tiles. Then, start planting Spikeweeds and Spikerocks in columns, if possible. Plant nuts in the third column to protect against Buckethead Zombies, and that is all you need to know about this strategy of grounded warfare. 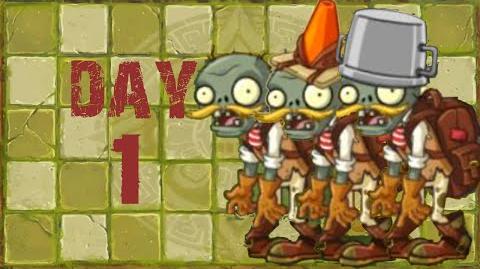 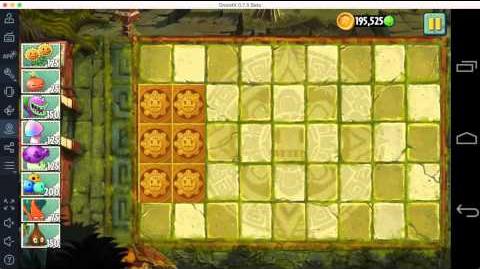 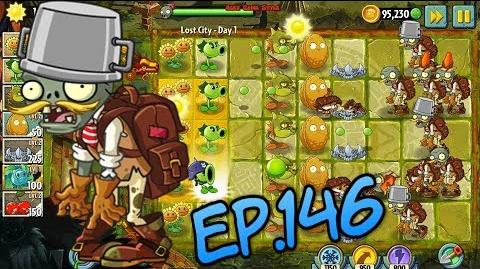 Retrieved from "https://plantsvszombies.fandom.com/wiki/Lost_City_-_Day_1?oldid=2331660"
Community content is available under CC-BY-SA unless otherwise noted.