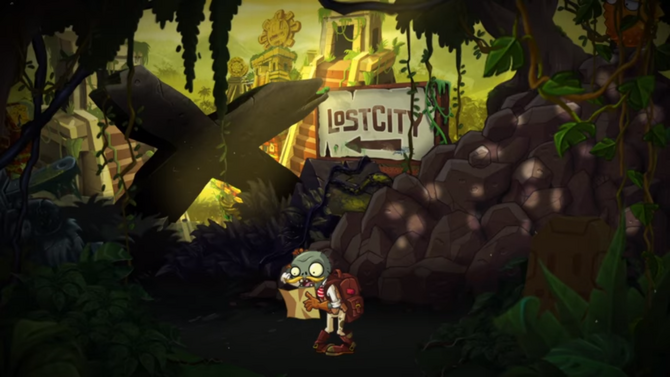 Complete Frostbite Caves
Lost City is the 5th world (8th world released chronologically) in Plants vs. Zombies 2, released along with the 3.6.1 and 3.7.1 updates.

After three weeks, Lost City Part 2 trailer was released on June 21, 2015, along with the developer diary two days later, on June 23, 2015, on the same day as the teaser parties and the release of Toadstool, the premium plant released alongside the second part of this world. Another 2 days later, Part 2 was soft released for Android devices. Next Tuesday on June 30, 2015, the official update was released.

The timeline of this world is unknown; it appears to be set in early Mesoamerica, but seems to take place during the early 20th century, as the city seems to have been decaying for a long time and the zombies appear to be from a more modern era of exploration, sporting Victorian clothing and more modern inventions such as airplanes.

This world is based on the lost world of Maya. The Lost City here is based on an ancient city found in a rainforest in Guatemala. The temple, which is in this world's icon, is a form of a Tikal Temple.

The main gimmick of this world is the Gold Tiles. When a plant is placed on a Gold Tile, it will immediately give the player 50 sun, and then produce another 50 sun every 20 seconds until eaten, crushed, or moved by the zombies. Replanting a plant on a Gold Tile generates initial sun. Nothing special happens when the player uses Plant Food on a plant located on a Gold Tile.

Discover the vanished city of gold, where sun is plentiful and misplaced zombies abound! Use special tiles for extra sun, for these treasure-seekers are no idol threat!

The player can gain access to Lost City by using the key obtained in Frostbite Caves - Day 30.

After beating Day 15, the player finds a map which leads to one of the lost temples. The player survives waves of Porter Gargantuars on Day 16.

On Day 32, Dr. Zomboss tells the player to not usurp his discovery of Lost City, and he and his zombies already report their findings to the Eminent Journal Of Missing and Mislaid. After defeating Zombot Aerostatic Gondola, Crazy Dave complains that after all those discoveries he hasn't found his taco yet, while Penny comforted him and ensured that the search will continue.

It is playable on Day 15, with two endangered A.K.E.E.s. This has the least amount of levels of its type in the world.