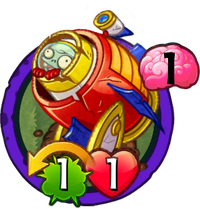 Not to be confused with Imp Cannon, a zombie from Plants vs. Zombies 2.

None
His friends keep telling him it's too dangerous, but he never listens. He's having a blast.
Loose Cannon is a galactic uncommon zombie card in Plants vs. Zombies Heroes and a member of the

Overshoot 2 trait and does not have any abilities.

He is based on a stunt performer, someone who performs dangerous stunts, often as a career, and a cannon, a piece of artillery that uses gunpowder or other usually explosive-based propellants to launch a projectile, which may or may not be explosive.

His appearance is a pun on the phrase "loose cannon," which is a phrase to describe someone who is out of control and capable of unintentional damage, as Loose Cannon is literally an Imp in a cannon. Loose also refers to his low 1

His friends keep telling him it's too dangerous, but he never listens. He's having a blast.

This zombie is a basic 1

Overshoot trait is what makes him stand out. You can combine him with Disco-Naut to ensure that his

Overshoot damage is unblockable or, if you are playing as Impfinity, use him as a glass cannon with Toxic Waste Imp to destroy anything in his way, or alternatively Imp Commander to draw a card before combat. However, the main usage for this zombie is to slowly do damage each turn to your opponent, which can increase your chances of winning in the late game if you plan your strategy carefully. This can also waste up their Super-Block Meter and lower their health.

In the late game, avoid using this zombie, as his stats, even with the

Overshoot trait, will not be good enough to hurt most plants, unless the aforementioned Toxic Waste Imp gives him

Deadly, or if drawing additional cards with Imp Commander.

Do not play this zombie on Spikeweed Sector or Hot Lava unless you are going to boost his health, as the environment's ability activates first.

Statwise, he is very weak. Anything that does damage will destroy him unless he has a health boost. However, be wary of his

Overshoot trait, especially if there is a Disco-Naut or an Imp Commander on the field. You can also use a damaging environment as its ability activates first before the

Overshoot damage. Speaking of damage, you can use a Banana Bomb to take him out easily. 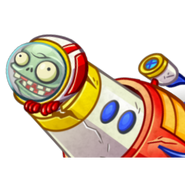 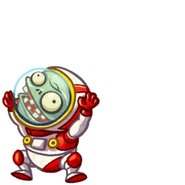 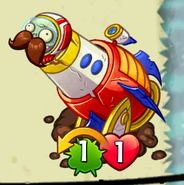 Loose Cannon with a mustache due to Imposter's ability 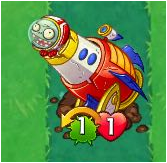 Tiny Loose Cannon due to a glitch 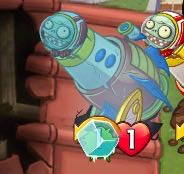 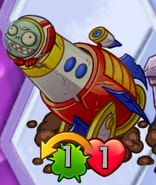 Loose Cannon tinted gray due to a glitch 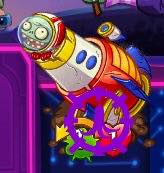 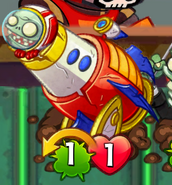 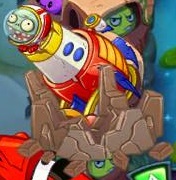 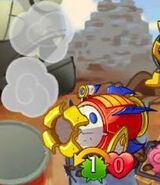