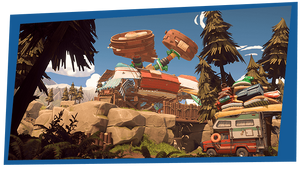 Loggy Acres is a Turf Takeover map in Plants vs. Zombies: Battle for Neighborville. The map is similar to the free roam region Weirding Woods. In this map the plants are on the defense and the zombies are on the offense. The zombies must bring a payload full of bombs to the Mallow Mortar which is raining marshmallows on Z-Tech Factory and destroy it, while the plants must try and stop the zombies from doing so.

"The Z-Tech Factory is under a sticky siege thanks to the plants’ Mallowmortar. The zombies’ super-smart-s’more plan to destroy the cannon backfired and they ended up covered in graham crackers and chocolate. So, what’s Plan B? Destroy the Mallowmortar with BOMBS! That will be much safer."

The zombies have to try to bring the payload over to a gate at the end of that section.

The plants should try to take advantage of the raised terrain around the area the snipe at zombies who are trying to push the payload.

The zombies should try and split up with some pushing the payload and other trying to take out the plants. The plants might try to snipe you from the raised terrain around your area so send some troops to try to take them out.

After the zombies bring the payload over to the gate it will open and the zombies have to push the payload through the gate. After that, it will close and to go back and forth players will have to use the smaller entrances on either side of the gate.

Try to prop yourself up by one of the windows at the top of the station from the outside. There you can shoot at zombies that are inside the station. The peashooter is really effective here because he can use the Chili Bean Bomb and Pea Gatling to quickly take out zombies inside the station.

If you can try to take control of the windows said above. You can be able to sneak attack any plants that are trying to snipe you from those windows and even shoot at the plants who are trying to defend the station from the inside. If you plan to attack the station from the inside which is the only way to capture it, try bringing close range characters such as the Scientist.

The payload becomes broken and the zombies have to deliver the bombs to the mallow-mortar by hand. The zombies must take the bombs from the cooler and bring the bombs to the drop-off point by the mallow-mortar and zombies can pick up only one bomb at a time. When a zombie picks up a bomb a purple bomb will be marked on the HUD that follows the zombie. Also they cannot sprint or use their abilities so teammates who are not holding a bomb should try to guard them, because of that teamwork is crucial in this final phase. Also, only a certain number of bombs can be out of the cooler at a time. After that the cooler is closed and no more bombs can be picked up until another bomb is either dropped off or detonates. After that the cooler will open again and another bomb can be picked up. If a zombie that is holding a bomb is vanquished, then the zombie will drop the bomb and the bomb will be marked as a red bomb on the HUD with a countdown timer. The bomb can be picked up again by another zombie but if the countdown reaches zero the bomb will have a small detonation. After that the zombies must get the bomb from the cooler all over again.

Consider sending some plants out the bridge where the zombies are going to be coming through usually holding bombs. The sides of the bridge gets bombarded by marshmallows so the zombies are forced to take the bridge to get to the mallow mortar. So lay traps there. Ready your special abilities and stop those zombies. Or you can defend the area by the mallow mortar where the bombs get dropped off. There are raised platforms by it where you can take out zombies right before they reach the point so pull all the stops you can.

If the Plant team wins then the mallow mortar will fire off a marshmallow, which will fly through the air and land on a statue of Dr. Zomboss by Z-Tech Factory.

If the Zombie team wins then it will show the final bomb getting sucked into the tube by the mallow mortar, which will then explode.

Retrieved from "https://plantsvszombies.fandom.com/wiki/Loggy_Acres?oldid=2225596"
Community content is available under CC-BY-SA unless otherwise noted.