Destroy a Plant.
A plague upon your lawns!
Locust Swarm is a basic common zombie trick card in Plants vs. Zombies Heroes and a member of the

to play, and its ability instantly destroys a selected plant on the field. Its plant counterpart is Squash.

It is based on a swarm of locusts, species of short-horned grasshoppers in the family Acrididae which possess both a solitary phase and a swarming phase.

Its old description is a reference to how locust swarms are a major threat to plants. It might also reference the fact that the collective noun for locusts is "a plague," and that one of the Ten Plagues of Egypt was a plague of locusts.

The new description is a reference to Mercutio's last words in Romeo and Juliet: "A plague upon both your houses!" abd/or King Lear: "A plague upon your epileptic visage!"

A plague upon your lawns!

Use it how you would when using any instant-kill trick like Rocket Science or Cut Down to Size since their abilities are very similar.

Locust Swarm does not have any restrictions on what it can destroy, and it is reliable (unlike B-flat, though it does cost less than the former). But on the downside, Locust Swarm is very expensive. It is also outclassed by many other instant-kills in most situations, even if they have limits. Locust Swarm also cannot affect

Untrickable plants. Still, even if you consider the negatives, it is a great card to have for many

Locust Swarm is also a pet trick, so if there is a Zookeeper or Cat Lady on the field and you saved 5 brains, you can destroy a plant while boosting your pets. However, if one wants to simply boost them and no dangerous plant fighter is present, one should not use it, but rather play a cheap pet card.

Despite its high reliability (only losing to Primordial Cheese Shover's evolution ability, which can destroy

Untrickable plants), Locust Swarm should be also paired with other removal cards, as, chances are, the plant hero can bait out the zombie player's removal cards with cheap, weak, yet dangerous plants to make way for their more powerful plants. And when they come, pave your own way by using the other removal cards.

The Smash is a good example since he also leads the

Hearty class, which can destroy weak plants (or weaken plants and make them vulnerable to tricks) and make way for Locust Swarm against stronger plants. Immorticia also has Rocket Science, effectively increasing the availability of hard removal cards, as both are usually used to counter powerful plants with high strength.

Beastly hero would bring Locust Swarm due to its effectiveness, so pay attention to the brain counter. If you see your opponent has saved at least 5 brains, then there is a high chance that Locust Swarm will be played. The best counter to this trick is Umbrella Leaf, as she makes all plants invulnerable to it, although Umbrella Leaf herself isn't. If you don't have her, conserving your stronger cards is a good (but slightly risky) strategy too.

You should also be wary if your opponent has a Zookeeper or Cat Lady on the field, because Locust Swarm is a pet card and thus can activate their abilities. While doing that just for the sake of boosting a zombie is rare, it should not be ignored. 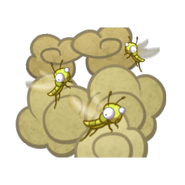 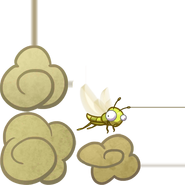 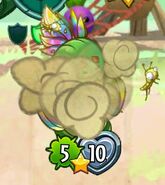 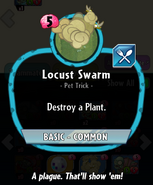