When played: Make Wall-Nuts next door.

Nut Evolution: Plants with no

He crowned himself King of All Hollow Earth. No one had the heart to tell him it was actually a parliamentary democracy.
Loco Coco is a triassic legendary plant card in Plants vs. Zombies Heroes and a member of the

He does not have any traits, and his ability makes a Wall-Nut in the front on both the non-aquatic lanes adjacent to him, while his Nut Evolution ability gives all plants with no strength on the field +3

He is based on the coconut (Cocos nucifera), the edible fruit of the coconut tree, specifically the king coconut, a variety of the coconut native to Sri Lanka; and a king, the title given to a male monarch.

His name is a combination of "loco," a synonym of "crazy," possibly referring to his description, and "coco," an abbreviation of "coconut," the real-life plant he is based on. These words may have been selected because they rhyme with each other. The nature of his name may also be based on the loco moco, a tropical dish from Hawaii.

His nut tribe may be a play on the word "nut" in "coconut."

His description is a reference to his name during development, which was "King Coconut."

He crowned himself King of All Hollow Earth. No one had the heart to tell him it was actually a parliamentary democracy.

Loco Coco has below average stats, but he can quickly strengthen your defenses by making Wall-Nuts. You can play Loco Coco to protect any glass cannons you have, and he is a fantastic addition to nut decks due to his ability and the fact that Loco Coco himself is also a nut. It also makes Muscle Sprout, Astro-Shroom, Go-Nuts and Berry Angry more effective due to his ability to make plants.

However, Loco Coco's main strength comes from his Evolution ability, giving not only the Wall-Nuts made 3

and turning them into both good offense and defense (which is already worth his cost), but also to any other plants with no strength. Again, this ability is optimal with non-Pecanolith nut decks in general.

For Pecanolith decks, while the strength boost is unnecessary, it does provide immunity to Weed Spray and the like, although there is Knockout to worry about. However, it is usually more efficient to use Three-Nut to set the

of plants to 3, as it comes out faster.

Since you need a nut to activate his Evolution ability, Wall-Nut, Small-Nut, and Forget-Me-Nuts are the best candidates for this, as they are the cheapest nuts in the game. This becomes an even easier task if you successfully Evolve one Loco Coco, as the Wall-Nuts he makes can be used for another Loco Coco's Evolution. But if Three-Nut is on the field, he doesn't even have to Evolve, as the Wall-Nuts will have 3

But as implied before, Loco Coco himself is rather lacking in combat unless boosted and will struggle to take down stronger zombies that can be played by turn 6. He doesn't have the Team-Up trait either, but that can be patched by a pre-played Team-Up plant, preferably that has also gained strength via his Evolution ability.

For an easy reference, here's the list of plants that can benefit from his Evolution ability.

Smarty (Citron and Beta-Carrotina only)

Here's the list of plants that can be used to Evolve him:

Smarty (Citron and Beta-Carrotina only)

While Loco Coco himself isn't very dangerous, his Wall-Nuts can be a nuisance. And if Loco Coco's Evolution ability has activated, it might even be threatening. Destroy as many nuts as you can to prevent him from Evolving, and lower the effectiveness of his Evolution ability if he Evolves. Weed Spray and Rolling Stone are good at it. If his plants do get 3

, you can play Knockout, but you won't be able to wipe the field at once due to its cost.

As for Loco Coco himself, you can either play Knockout or deal with him with your own zombies, which won't be hard since there are many strong zombies playable by turn 6, although you can't exactly use zombies the turn he is played unless you have Teleport or Teleportation Zombie. Cakesplosion has enough power to destroy it, provided his health isn't boosted. But since Loco Coco's stats don't really pose a threat, you should prioritize bigger threats than him. 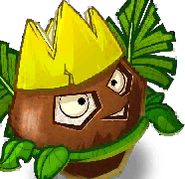 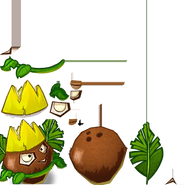 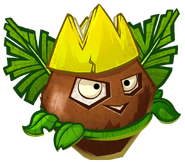 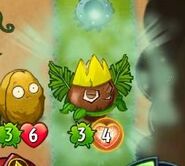