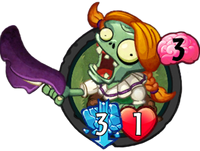 When revealed: Move this Zombie.
In her opinion, there's no better song to line dance to than the "Zombie Shuffle."
Line Dancing Zombie is a premium super-rare zombie card in Plants vs. Zombies Heroes and a member of the

. She has the Gravestone and

Strikethrough traits, and her ability moves her onto a selected lane when she is revealed.

In her opinion, there's no better song to line dance to than the "Zombie Shuffle."

This zombie is a glass cannon, but a dangerous one. Namely, her Gravestone trait, combined with the

Strikethrough trait and her ability to switch lanes can be used to make up for her low health. In most cases, her ability would be the best part of this zombie: you can either move her onto a safe lane where a plant can't hurt her through regular attacks or Splash Damage, allowing her to do 3 damage straight to your opponent each turn, or move her onto a lane with a glass cannon if it is played on an empty lane or behind a Team-Up to remove it without letting it hurt you, although Line Dancing Zombie will be destroyed too. The latter is a good strategy against swarm decks, where such glass cannons are common.

As she comes out of a gravestone, you can use Headstone Carver to boost her stats, making her do 4 damage, which lets her destroy a wider variety of plants in a single attack. Alternatively, if you are Brain Freeze or Neptuna, you may use tricks such as Vitamin Z or Camel Crossing to increase her survivability, applying pressure to your opponent. Line Dancing Zombie could go in Impfinity's dancing decks, but she is not a good candidate in such decks due to her low health and Impfinity's lack of health-boosting cards.

Strikethrough trait prevents you from blocking damage with a plant, and her moving ability allows her to move to wherever your opponent wants, making her a pretty versatile threat.

Fortunately, she is not without her counters. As she comes out of a gravestone, you may use Grave Buster to destroy her before she even gets to do anything. Once she is revealed, you can destroy her with cards such as Sour Grapes, Chomper, or Whack-a-Zombie. Iceberg Lettuce may be used to prevent her from attacking, but only when she survives combat on the previous turn, allowing you to destroy her without letting her hurt your plants and yourself. 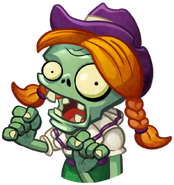 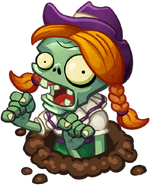 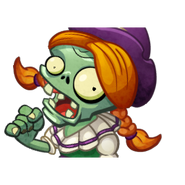 The message that appears when Line Dancing Zombie is revealed 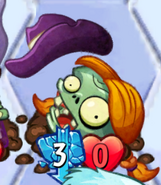 and a star icon on her strength

Line Dancing Zombie tinted gray due to a glitch

Gigantic Line Dancing Zombie due to a glitch 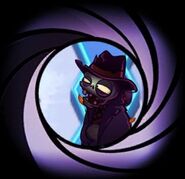 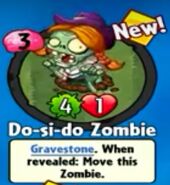 The player receiving Line Dancing Zombie from a Premium Pack before update 1.2.11
Community content is available under CC-BY-SA unless otherwise noted.
Advertisement