Dino-Roar: Shuffle a Magic Beanstalk into your deck.
Sometimes one Plant provides both the Army and the Navy.
Lima-Pleurodon is a colossal legendary plant card in Plants vs. Zombies Heroes and a member of the

. It has the Amphibious trait, and its Dino-Roar ability shuffles a Magic Beanstalk into the plant hero's deck. This ability stacks with each Lima-Pleurodon on the field and persists until all Lima-Pleurodons are removed from the field.

It is based on a pea/bean plant, specifically the lima bean (Phaseolus lunatus), a legume grown for its edible seeds or beans; and the Liopleurodon, a genus of large, carnivorous marine reptile belonging to the Pliosauroidea, a clad of short-necked plesiosaurus.

Its description is a reference to its ability and the Amphibious trait.

Sometimes one Plant provides both the Army and the Navy.

Lima-Pleurodon has fairly typical stats for a 1

plant and comes with the bonus of having Amphibious. But other than that, this plant doesn't really have any outstanding traits to set it apart from other plants of its cost.

The one thing that sets Lima-Pleurodon apart from other plants is its ability to shuffle a Magic Beanstalk into your deck every time you draw a card. This makes Lima-Pleurodon a useful plant in bean decks as it is another means of shuffling cheap and powerful Magic Beanstalks into your deck alongside Moonbean and Sow Magic Beans, not to mention Magic Beanstalk is a powerful and cost-effective plant. This card can also benefit other Dino-Roar cards well, as it shuffles cards that draw a card when played, which activates their Dino-Roar abilities. But as good as Lima-Pleurodon's ability sounds, you will need to activate its Dino-Roar ability at least four times before it goes down, or else you are better off playing Sow Magic Beans instead.

Much like other Dino-Roar fighters, having a deck which focuses on drawing and Conjuring cards is the best way to take advantage of its ability.

Green Shadow has the best use out of Lima-Pleurodon, as the

Mega-Grow class gives her easy access to card draw options such as the aforementioned Moonbean, Flourish, and Party Thyme. She also has plenty of ways to boost Lima-Pleurodon, also from the Mega-Grow class, given that with its base stats, Lima-Pleurodon will not survive easily in the late game. For example, she can play Lima-Pleurodon, then use Embiggen on it, making it a 4

on turn 2. Just watch out for Rocket Science, though.

As a fighter, Lima-Pleurodon is above average, but still ordinary for its 1

cost. However, it is not wise to allow this plant to live for a long time due to its ability to shuffle Magic Beanstalks into the plant hero's deck, which may become problematic in the late portions of the match. You should prepare cards that can destroy it regardless of placement, as your opponent will most likely play it on the aquatic lane. If you don't have many Amphibious cards, you can use tricks such as Rolling Stone, Bungee Plumber, and Alien Ooze to take out Lima-Pleurodon.

You can also make use of Quickdraw Con Man to make your opponent think twice before using this card's ability. 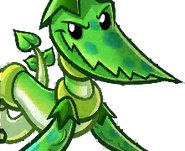 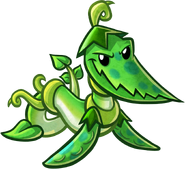 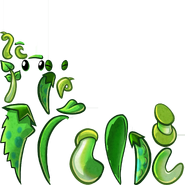 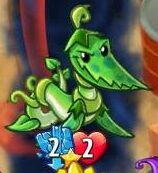 Time to Shine being played on Lima-Pleurodon

Retrieved from "https://plantsvszombies.fandom.com/wiki/Lima-Pleurodon?oldid=2197558"
Community content is available under CC-BY-SA unless otherwise noted.