For other versions, please refer to the Lily Pad (disambiguation) page.

Fusion: A Plant played on this gets Amphibious. Conjure a Leafy card.
When Neptuna's Triassic Invasion flooded Hollow Earth with vast new oceans, Plants quickly evolved to survive.
Lily Pad is a triassic rare plant card in Plants vs. Zombies Heroes and a member of the

Its Fusion ability is a reference to its ability in the two aforementioned games, while its attacking animation is based on its idle animation from Plants vs. Zombies 2.

Its issues, to outline, are largely based around its investment value not being particularly worth it. Its stats are rather poor and it cannot defend itself, but it has the upside of being a 1

Amphibious plant. However, this makes it so that you need to spend at least 2

to play a plant on it, and get a random card through Conjuring that is unlikely to be very helpful to your main strategy. The final nail in the coffin for this card in competitive play is how redundant it is, existing a class where great Amphibious cards are already plentiful, so there is little need to set up for a "new" Amphibious plant for your strategy.

The only serious valid reason to consider Lily Pad is to take advantage of leafy synergy, which has very little presence in the current meta.

This card can likely survive on its own against some heroes, but classes like

Hearty have access to cards that deal pretty well with low-stat plants with Lily Pad.

Sneaky also have their own set of Amphibious cards to counter this immediately. So, you most likely would either find yourself play this on turn 1 (since you have a good chance your opponent won't be able to counter in the Zombie Tricks phase if they don't have avaliable tricks at hand), or fusing it immediately with another card upon playing.

Should you decide to use Lily Pad in your deck despite its limitations, it is noteworthy that the type of plants you would want to play on a Lily Pad in the aquatic lane are very strong ones that benefit from being on the aquatic lane; such plants generally draw immediate attention from your opponent, so playing it on the aquatic lane would be extremely advantageous in such a scenario since it is trickier to tackle Amphibious threats. To outline some non-Amphibious Smarty cards that go in this category, there are cards like Go-Nuts, Jelly Bean, and Shooting Starfruit. There are also cards from other classes that could suit Lily Pad well, which will be outlined in this set of bulletin points.

While you can't directly counter Lily Pad's abilities, the card itself is rather defenseless ignoring its Amphibious trait. Very common and basic tricks that destroy weak plants in the

Hearty classes, like Bungee Plumber and Rolling Stone, take care of it very easily. Also, the

Sneaky classes have their own set of Amphibious defenses. Basically, deal with Lily Pad as you would with any other weak Amphibious plant.

But keep in mind that your opponent will attempt to Fuse it as fast as possible, and as such, the opponent may refrain from playing it unless they are able to fuse it in one turn, which is most likely the case, so be prepared to face unconventional aquatic threats. 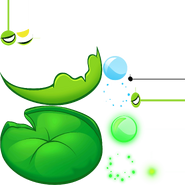 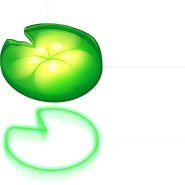 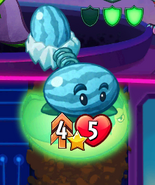 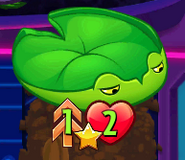 Lily Pad with the

Embiggen being played on Lily Pad

Nibble being played on Lily Pad