Super Rare
From his winged cap, to his Basilisk Blasters, to his hulking Drake Z-Mech, it's pretty clear that Lil' Drake has a thing for dragons. It should come as no surprise then, that his dream is to one day achieve full flight with his butt-mounted boosters.
Lil' Drake is the Super Rare fire Imp variant in Plants vs. Zombies: Garden Warfare 2. His Z-Mech is a large mechanical dragon that has more health than the normal Z-Mech. It is equipped with a flamethrower, can tackle plants, and create a smoke screen in front of it that can shield up to 75 damage, and can jump three times as opposed to one. The Drake Mech lasts for 1 minute.

From his winged cap, to his Basilisk Blasters, to his hulking Drake Z-Mech, it's pretty clear that Lil' Drake has a thing for dragons. It should come as no surprise then, that his dream is to one day achieve full flight with his butt-mounted boosters.

The Lil' Drake's primary weapon is the Basilisk Blasters. The Basilisk Blasters fire slower than Imp Blasters, but with an added fire effect making damaged plants take damage overtime. It also has slightly more damage. It can fire 30 bullets before reloading.

The Drake Mech's primary weapon is the Drake Flame, a flamethrower that deals 13 damage per second burning plants for an increased amount of fire damage compared to the Basilisk Blasters. It functions similarly to the Fire Chomper's Flame Spray, but with larger range. The Drake Flame has infinite ammo, but if it fires too long, it will immediately stop and cool down for a few seconds before being able to fire again.

As with all Imps, remain mobile at all times and watch your health. This is a good variant to take on multiple plants at once, due to the fire damage. In addition, the Drake Mech is tied for the most health out of all Mechs, so staying alive is easier. Focus your fire on Sunflowers and Heal Flowers, but spread the damage around so that the whole group slowly takes fire damage. Once in your mech, focus on large groups of plants or high-health plants such as bosses in Graveyard Ops, and make an attempt to stay away from Citrons. Use the Drake Swoop to close in on far off enemies or to escape a dangerous situation. Wing Flap is best used when engaging a target in combat or attacking an objective. Keep in mind that it blocks damage from all directions and not just the front. Combining this with its high health, the Drake Mech can easily defeat multiple plants for Team Vanquish and help capture gardens in Gardens & Graveyards or Suburbination.

Lil' Drake is the fire variant for the Imp class, which can make him an extremely dangerous opponent, if not spotted soon. can dish out some serious damage if not noticed. In addition, his mech is much bulkier than other mechs, as well as having a shield to protect itself. By himself, the Imp should be relatively easy to take out with classes like Peashooter, Kernel Corn, or Citron. In the mech, however, he can attack groups from close range. The mech can be a devastating opponent if not dealt with properly. Since it has no method of attacking long range aside from Drake Swoop, and the Drake Swoop itself has a very long recharge and will probably not be used against you, the only safe way to take care of the Drake Mech to attack it from afar. If the mech gets into a garden in Gardens & Graveyards, use everything you have to defeat it, as it will quickly vanquish every plant in the garden if left alive. Citron's EMPeach is slightly less effective on this mech due to the Mech's absurd ability cool-down, and the fact that the Drake Mech has possibly already used said abilities getting to the garden. However, it's still good to use an EMPeach to stop its flame attack for a second or two. 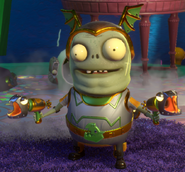 Lil' Drake in the Customization Booth 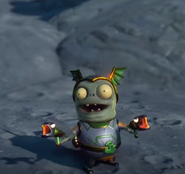 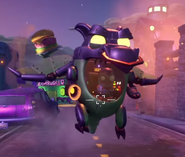 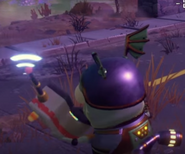 Lil' Drake calling in his mech 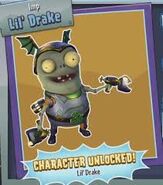