Lightning Reed is a Spawnable Potted Plant in Plants vs. Zombies: Garden Warfare 2 and Plants vs. Zombies: Battle for Neighborville, which can be spawned in multiplayer and the Backyard Battleground. It fires a stream of lightning that damages a single target and also shocks them, spreading the damage to other targets, which is similar to Electro Brainz's Electro Beam. It can also use a close-ranged electric discharge attack to damage zombies near it. Its ranged attack is named Lightning Beam. It also has an attack where it releases lightning all around it, similar to the Toxic Gloom-shroom, but then has to "recharge" for longer, called the Lighting Blast. Its zombie counterpart is Mr. Electro.

Shoots high voltage plant-based lightning that arcs to nearby zombies. 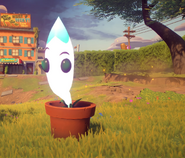 Lightning Reed
Add a photo to this gallery

Retrieved from "https://plantsvszombies.fandom.com/wiki/Lightning_Reed_(Spawnable)?oldid=2202681"
Community content is available under CC-BY-SA unless otherwise noted.