Uses a lightning gun to attack plants with plasma.

Lightning Gun Zombie has "Frankenstein" as his nickname. He always stays in his lab to invent more powerful lightning guns. But he is obviously troubled by his messy, silver hair. "Sometimes, you need to sacrifice your image for science." Lightning Gun Zombie doesn't care.

Lightning Gun Zombie (闪电枪僵尸; pinyin: shǎndiàn qiāng jiāngshī) is the eighth zombie encountered in Sky City. He can shoot plasma balls which have an either positive and negative electric charge for each shot that affect plants exactly like the lightning gimmick of Sky City. The shot's effect on the plant depends on what kind of electric charge the plant currently has.

Lightning Gun Zombie absorbs 700 damage per shot and does not degrade.

This is a dangerous zombie and is comparable to Hunter Zombie, only that he needs two hits to neutralize a plant. He shoots positive and negative electric balls, and when his hits connects twice, the effect is dependent on the second hits charge. If there are two positive charges, the plant will take continuous damage and will usually be destroyed. If both are negative charges, it will stun the plant for a while. If the charges are mixed, it will slow down the plant to a crawl and render it almost useless. Just like the Hunter Zombie, he is slow, which gives him time to attack your plants, as well as ensuring faster zombies such as Flying Gargantuars and Double-Cabin Aircraft Zombies protect him. He can also attack ground plants as well which makes things worse. Ampthurium can help absorb his shots, which could be helpful at the start, but he does not guard the player's aerial plants against him, and it only absorbs nearby charges after being fed Plant Food. Saucer Squash can help stun the zombie for a while and Board Beans can easily destroy it. Spinnapple does not deflect his shots. 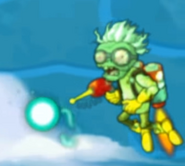 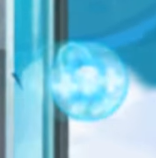 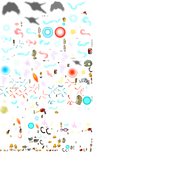 A hypnotized Lightning Gun Zombie
Add a photo to this gallery

Retrieved from "https://plantsvszombies.fandom.com/wiki/Lightning_Gun_Zombie?oldid=2229254"
Community content is available under CC-BY-SA unless otherwise noted.