When played: Conjure a Root.
Beta-Carrotina knows she can always count on him to get to the root of the problem.
Lieutenant Carrotron is a super-rare plant superpower card in Plants vs. Zombies Heroes and a member of the

. He has the Team-Up trait, and his ability Conjures a root card when he is played.

His description makes a pun on two meanings of "root," meaning "the basic cause, source, or origin of something," which is its original meaning here, and "the part of a plant that attaches it to the ground or to a support," which is a reference to his ability.

Beta-Carrotina knows she can always count on him to get to the root of the problem.

or less. His Team-Up trait can also be used to protect a plant or to keep him alive if you want to play another plant to protect him. But what's even better is that he also Conjures a root, giving you a free card draw, which is quite similar to Immorticia's signature superpower (if Zom-Bats lasts only for a turn). The root he Conjures can be ranged from an average Sweet Potato to a powerful Soul Patch.

Being in a root tribe as well as him Conjuring a root, this can benefit Starch-Lord well as it makes both him and the root plant he Conjures stronger when they are played.

You can also use Rescue Radish to bounce Lieutenant Carrotron and play him again to Conjure another root as well.

Since he has the Team-Up trait, he can be boosted by Go-Nuts. And because he counts as a plant being played, he can synergize with Muscle Sprout and Astro-Shroom. Captain Cucumber can also make the Conjured card cost less. Because Beta-Carrotina is not a Mega-Grow or Kabloom hero, she has to get said plants from Photosynthesizer and Lily Pad first. An alternative way, if you are playing as Green Shadow and Nightcap, is to obtain him from Bird of Paradise first.

There is no way to stop this plant's ability as it Conjures a free root card for the plant hero. Take caution when he is played, especially if Starch-Lord is on the field. Otherwise, he is simply a 2

plant with Team-Up. You can generally treat this plant like Shellery, as they have the same stats, trait, and class, but with root synergy.

Take note that it is not a good option to Bounce him, because he can be played again and give your opponent another root. 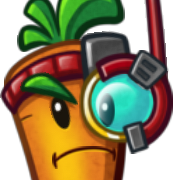