Never have more than 24 plants

Level 3-13 was a bonus level, and the thirteenth and the final Pool level in Plants vs. Zombies: Journey to the West. The player had to pay 20 gems or fully grow a Tangle Kelp, a Spikeweed and a "???" in their Zen Garden to gain access to this level. To complete the level, the player had to never have more than 24 plants.

Tip: Use Threepeater and Torchwood so that the plants can deal great damage to the zombies without costing a large amount of plants. 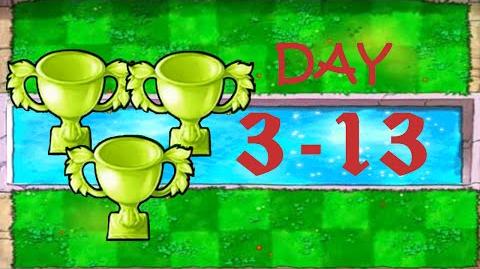 Plants vs. Zombies Journey To The West - Day 3-13
Add a photo to this gallery
Retrieved from "https://plantsvszombies.fandom.com/wiki/Level_3-13?oldid=2191730"
Community content is available under CC-BY-SA unless otherwise noted.