Level 2-12 was a bonus level, and the twelfth Night level in Plants vs. Zombies: Journey to the West. The player had to pay 20 gems or fully grow a Scaredy-shroom, a Sun-shroom and a Grave Buster in their Zen Garden to gain access to this level. To complete the level, the player had to not plant on the two leftmost columns. 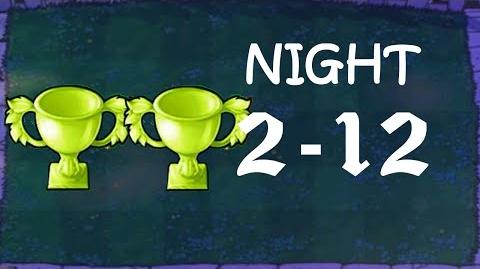 Plants vs. Zombies Journey To The West - Night 2-12
Add a photo to this gallery
Retrieved from "https://plantsvszombies.fandom.com/wiki/Level_2-12?oldid=2181120"
Community content is available under CC-BY-SA unless otherwise noted.