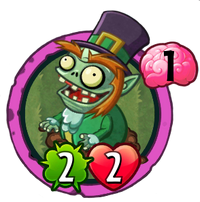 When played: Shuffle a Pot of Gold into your deck.
When he offers to grant you a wish, do not wish for infinite wishes. It just doesn't work like that.
Leprechaun Imp is an event zombie card in Plants vs. Zombies Heroes and a member of the

. He does not have any traits, and his ability shuffles a Pot of Gold into the zombie hero's deck when he is played.

He was introduced in update 1.12.6 for the Luck O' the Zombie event, along with Shamrocket, Electric Blueberry, Plucky Clover, Spyris, and Bonus Track Buckethead, and became craftable in update 1.16.0.

He is based on Imp's Luck O' the Zombie Piñata Party costume in Plants vs. Zombies 2. When he is played, he appears in a pot of gold, similarly to how Leprechaun Imps appear during the "Leprechauns!" ambush during the parties.

When he offers to grant you a wish, do not wish for infinite wishes. It just doesn't work like that.

Super Brainz and Huge-Gigantacus can use him to his full potential due to their easy access to the Imp tribe synergy cards. He can be paired with Toxic Waste Imp to get the

Deadly trait and be viable even in the late game or draw a card if he hits your opponent with the help of Imp Commander. Alternatively, they could also play Firefighter or Mixed-Up Gravedigger to reactivate his ability, allowing him to add more Pots of Gold into their deck.

Once this zombie is played and activates his ability, he can be treated as a plain 2

zombie, and thus, can be dealt with easily. Unless he has become a huge threat and you have no instant-kill cards to dispatch of him, do not Bounce this zombie, as your opponent can replay this zombie to earn more Pots of Gold, especially in the late game.