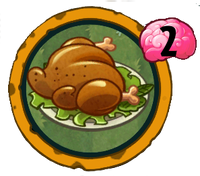 .
Zombies love them almost as much as brains.
Leftovers are a triassic uncommon zombie trick card in Plants vs. Zombies Heroes and a member of the

Treat this trick as a weaker, yet cheaper version of Monster Mash. Just like Monster Mash, Leftovers work especially well when you have a zombie on most, if not all lanes.

If you see a Turkey Rider, be careful of destroying it as it gives your opponent this card, which can boost other zombies. In other cases, there is really not much you can do to go against Leftovers, except playing as many plants on the field as possible to block. 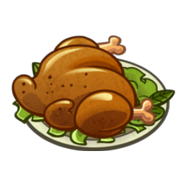 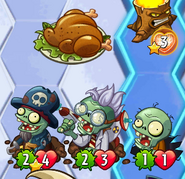 Leftovers in a cameo in one of PvZ2 advertisements 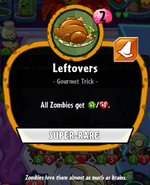