Leaper Zombie can cross the ground's defenses and obstacles from the air. If the aircraft crashes, it will be miserable.

(makes him drop his flying rig)

Leaper Zombie calls himself "Dafin Zombie", look at his newly built flying rig! If it falls, it is a zombie weight problem, it has nothing to do with the product.

Leaper Zombie (飞行器僵尸, pinyin: Fēixíngqì jiāngshī) is the fourth and final unique zombie to appear in Renaissance Age in the Chinese version of Plants vs. Zombies 2. He uses his flying rig to glide over plants. Upon reaching the seventh or sixth column, he will drop his flying rig that instant kills the plant in front him. The flying rig can act as a blocker, similar to Surfer Zombie's surfboard. A Blover or Fanilla can be used to make him drop his flying rig. However, Hurrikale can kill him instantly.

Leaper Zombie is based on the flying machine, which was designed and invented by Leonardo Da Vinci.

This zombie can be a threat to the player if not properly prepared, as he has relatively quick movement speed and quite high toughness. Although Blover is not essential to defeating this zombie it is recommended that the player chooses it to lower his speed and lose his ability to float over plants, although one should be aware that he will immediately drop his flying rig, crushing any plants in its way. Once land-bound he will act as any other ability-less zombie and should be treated as such. 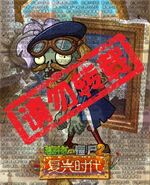 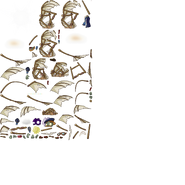 Leaper Zombie without his flying rig

Leaper Zombie hiding in a vase

Leaper Zombie in a teaser for Penny's Pursuit, along with Explode-O-Nut Zombie and Furnace Zombie

Scrapped design
Add a photo to this gallery

Retrieved from "https://plantsvszombies.fandom.com/wiki/Leaper_Zombie?oldid=2369244"
Community content is available under CC-BY-SA unless otherwise noted.