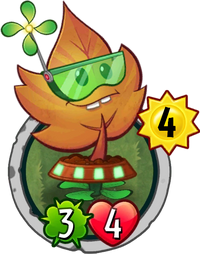 When played in an Environment: Bounce a Zombie.
"You wanna keep your lawn tidy? Tired of lookin' at those unsightly Zombies? Then I'M your guy."
Leaf Blower is a galactic uncommon plant card in Plants vs. Zombies Heroes and a member of the

. It has the Amphibious trait, and its ability gives a selected zombie the Bounce effect when it is played in any environment.

It is based on a leaf (specifically the one of a maple tree), an organ of a vascular plant and the principal lateral appendage of the stem.

Its appearance and name are puns on a leaf blower, a device used to blow weeds and plants away, as Leaf Blower is literally a leaf that "blows" zombies away.

Its description is a reference to, or more precisely, an advertisement of its ability.

"You wanna keep your lawn tidy? Tired of lookin' at those unsightly Zombies? Then I'M your guy."

Leaf Blower can perform exceptionally well when used properly. Compared to Jumping Bean, Leaf Blower has better stats and the Amphibious trait, as well as costing 1

less. This means that it can be a substitute to Jumping Bean in most decks, and even a replacement in decks with many environments. Like Jumping Bean, its 3

makes it invulnerable to many destroying tricks such as Rolling Stone and Rocket Science as well.

However, its ability is rather situational as it only takes effect when you play it in an environment, meaning that it becomes less effective when your deck doesn't have many environments. If you want to take this along in your deck, be sure to pack many environments in it as well. Fortunately, zombie environments can also activate Leaf Blower's ability, meaning you can also take advantage of your opponent's strategies regarding environments. Another small downside is that unlike Jumping Bean, Leaf Blower's tribe synergy only matters as one hero (being Green Shadow), whereas Jumping Bean can easily be used in bean decks by all Smarty heroes.

It is a good idea to play this in Bog of Enlightenment, as it will Bounce a zombie and gain 2

. It will also increase its survivability if the zombie in front of it is not Amphibious and if you choose to Bounce a zombie aside from said one. Playing this in Pair Pearadise is also a good option, allowing you to Bounce two zombies in one turn without spending a lot of sun. However, only Nightcap can perform this combo naturally.

This plant can Bounce a zombie for cheap if your opponent plays it in an environment. What is more dangerous is that this ability activates even if Leaf Blower is in a zombie environment, so simply replacing the environment won't work. The only way to prevent it is to Bounce the environment with Excavator Zombie before Leaf Blower can be played there, so you will have to face the consequences if you don't have him. But other than that, this plant doesn't serve much as a threat due to its mundane stats. If you need to destroy this plant easily, Final Mission and Knockout (if it isn't in Bog of Enlightenment) are two good examples. 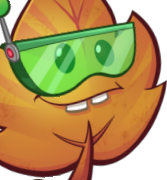 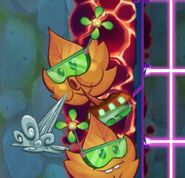 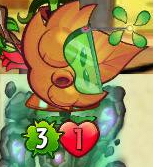 Leaf Blower about to attack

Leaf Blower with the

Leaf Blower with the

Leaf Blower tinted gray due to a glitch

Leaf Blower on the background of the Galactic Gardens battlefield