For the version in Plants vs. Zombies 2, see Lava Guava.

Do 2 damage to each Zombie here and next door.
If played on the Ground, make Hot Lava here.
"'I try to stay cool, I really do. But Zombies! Man, they make me blow my top!"

Lava Guava is a galactic rare plant trick card in Plants vs. Zombies Heroes, and a member of the

to play, and their abilities do 2 damage to a selected zombie and those on the lanes adjacent to them, if there are any, and make Hot Lava on their lane if they are played on a ground lane.

They are based on the plant in Plants vs. Zombies 2 with the same name and similar appearance. Their description is a reference to their PVZ2 description.

"I try to stay cool, I really do. But Zombies! Man, they make me blow my top!"

Lava Guava can be seen as a much weaker Cherry Bomb due to how they do much less damage, while costing only 1 sun less. Lava Guava also has no beneficial tribes either, meaning they cannot synergize with Sergeant Strongberry, High-Voltage Currant, or Strawberrian. However, the fact that they create an environment on a ground lane which damages both plants and zombies here before combat can benefit plants such as Hibernating Beary, Pear Cub (both the former and the latter can only be used by Spudow naturally), and Invasive Species. This card can also be played to remove a threatening zombie environment such as Laser Base Alpha, Black Hole, or Moon Base Z, as well as boosting Cosmoss, which can only be done as Solar Flare.

Still, if you need a card just for clearing the field, Cherry Bomb is usually a better choice, as while they are more expensive by 1 sun, they can do double the damage (and even more damage when used with the berry synergy cards), and won't leave an environment that damages your plants over time. Alongside, if you only want the environment itself, Hot Lava is playable for only 1 sun.

This card is mostly used as a weaker field-clearer compared to Cherry Bomb. Hence, you do not need to worry about this card too much as long as you keep your zombies healthy. In fact, Camel Crossing can completely nullify Lava Guava's main ability, although only if you played it the turn before Lava Guava is played. However, you do want to know that this can also override one of your environments, so try not to always rely on one zombie environment. Just like the Cherry Bomb strategy, you can try to keep your zombies apart and not adjacent if you can. Or, since they only do 2 damage, you can play Knight of the Living Dead as he will not be affected. Of course, it's only for Hearty heroes. And since it makes Hot Lava when it's played, Neutron Imp can do a bonus attack, considering that Hot Lava is an environment, but the only thing you have to worry about is Solar Flare's Wing-Nut. 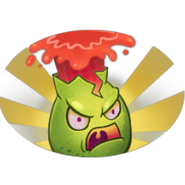 Lava Guava being the featured card in the menu for the July 16th, 2017 Daily Challenge