Last Stand is the sixteenth mini-game in Plants vs. Zombies, Plants vs. Zombies: Journey to the West, and Plants vs. Zombies: Great Wall Edition and is unlocked after beating Adventure Mode and completing 13 other mini-games. It consists of a series of five flags, located in the Pool area, which the player must survive in order to win. However, unlike the Survival Mode, the player is not allowed to switch seeds between two waves of attack. The player cannot plant any sun-producing plants, Puff-shrooms or Sea-shrooms. However, they do get to spend 5000 sun in the beginning of the mini-game and as the player progresses, he/she will earn extra sun (250 sun) after each wave.

The mini-game may be named after many games or the actual term "last stand," which refers to when a small force holds its position when attacked by a much larger force, and while it knows that it will be defeated, the smaller force hopes to delay, severely damage the larger force, or even defeat the larger force. 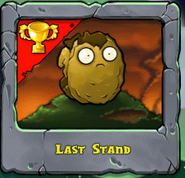 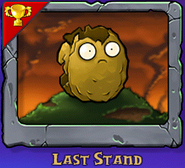 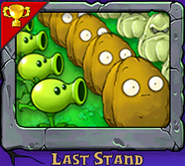 Old iPhone icon
Add a photo to this gallery

In the start, the player gets 5000 sun and can choose any plant except sun-producing plants. These plants include Sun-shrooms, Sunflowers, Twin Sunflowers, Puff-shrooms, Sea-shrooms, and the Imitater version of any of them. After the player defeats the last zombie for the flag, that last zombie will drop 250 sun. This is the only time they get sun after starting the first onslaught.

Last Stand is frequently used for gold farming, with as many Marigolds as possible, Gold Magnets collecting the coins automatically for the player and Gloom-shrooms for attacking. This will get them about 5000 to 9000 coins, depending what build they use. For more info, see Money guide.

Retrieved from "https://plantsvszombies.fandom.com/wiki/Last_Stand_(PvZ)?oldid=2191280"
Community content is available under CC-BY-SA unless otherwise noted.