when you play a Plant here.
He's really good at entertaining himself.
Laser Cattail is a galactic super-rare plant card in Plants vs. Zombies Heroes and a member of the

He has the Amphibious and Team-Up traits, and his ability gives him +1

every time a plant is played or made on his lane.

He is based on the plant from Plants vs. Zombies with a similar appearance, and a cyborg, a being with both organic and biomechatronic body parts. He may also be based on the laser cat meme. He also bears a resemblance to his Plants vs. Zombies 2 Chinese version counterpart, who has robotic features in its design and fires lasers as part of its plant food effect.

His name is a combination of "laser," referring to his laser pointer, and "Cattail," the Plants vs. Zombies plant he is based on.

His description is a reference to how cats like chasing laser pointers in real life.

He's really good at entertaining himself.

Laser Cattail has low stats for 2

, but makes up for it with a good ability and the Amphibious and Team-Up traits. This makes Laser Cattail a versatile shield that can also get stronger. However, due to his low health and base strength of 2, he is weak to instant-kill cards like Weed Spray or Rolling Stone, or any form of damage until boosted.

on top of his initial boost. He also synergizes well with Mixed Nuts as if you play Laser Cattail then Mixed Nuts on his lane, both receive a stat boost. However, only Rose can use the latter strategy normally.

Another good synergy is Go-Nuts, as whenever you play a Team-Up plant in front of Laser Cattail, it gets +2

from his ability and Go-Nuts' ability combined. Puff-Shroom is another example, as while Puff-Shroom itself has the Team-Up trait, it is free, giving Laser Cattail a boost on turn 2. However, only Nightcap can do this.

Thanks to his Team-Up trait, it is fairly easy to play another plant in front of Laser Cattail, giving him +1

However, sacrificing plants just to boost Laser Cattail is a waste, and

Frenzy zombies can easily tear through this formation anyway, not to mention Laser Base Alpha and Area 22.

Despite his low stats, Laser Cattail can be a troublesome plant due to him having Amphibious and Team-Up, making him hard to destroy when he gets boosted. Therefore, it is best to destroy him as fast as you can.

Since your opponent could play him on an empty lane, tricks and abilities are recommended. If unboosted, Weed Spray and Rolling Stone, as well as Celestial Custodian played in an environment, can destroy him instantly. If his strength goes over 4, play Rocket Science. If his strength is 3, he cannot be destroyed by the aforementioned tricks. In this case, B-flat or Locust Swarm will surely do the job.

You can also use Bungee Plumber or Trapper Territory to destroy him easily, but it is best done right after he is played. But if he is played to protect a plant (preferably also fronting a zombie), dispatching Laser Cattail will be much easier, since the most health he will get is 2 (only if the plant is played after him, otherwise 1), meaning that most zombies will have enough strength to destroy him. 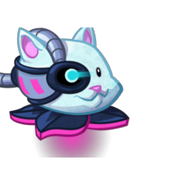 Three Laser Cattail cards in the mulligan section, along with a Mixed Nuts card 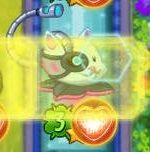 Evaporate being played on Laser Cattail