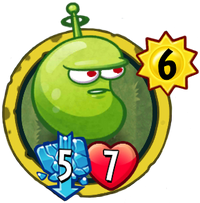 None
"Physics, baby! I'm emittin' all KINDS of coherent radiation!"
Laser Bean is a premium super-rare plant card in Plants vs. Zombies Heroes and a member of the

Strikethrough trait and does not have any abilities.

Strikethrough trait is a reference to how Laser Bean's laser can pass through multiple targets in Plants vs. Zombies 2.

plant, which isn't very astounding. But thanks to its

Strikethrough trait, you can use it as a finisher or late-game card, where it can alarm your opponent to react to a plant that always (barring Super-Blocks) chips a quarter of their maximum health per turn. It is a very reasonable 'big drop' in the mid-to-late game, because of its solid stats and the ability to pressure your opponent, and it is also a solid card in many 'mid-range' Solar decks which aim to drop one big card every turn.

Each hero has their own unique strategy to use with it. Wall-Knight can use Pecanolith to ensure that it does 7 damage instead of 5 (it will weaken as it takes damage, however), Solar Flare can increase its base strength, and Chompzilla can use boosting cards like Grow-Shroom on it or use Umbrella Leaf to give it Untrickable. Rose could take advantage of bean synergy, but bean synergy is not a good idea as most bean decks cannot last that long; instead, the best she can do is to shut down any zombies that threaten it with

However, it is expensive, so it is recommended to quickly ramp up sun to drop this earlier where your opponent may not be able to handle it. Laser Bean is also vulnerable to removal and doesn't have any immediate effect on the field. It also lacks synergies, only having raw stats so it may not be more useful than others.

Laser Bean can be harmful if you leave it alone for too long; it may have average stats, but you have to stay aware that it can still constantly do 5 damage to you every turn. But otherwise, it shouldn't be a huge worry to see on turn 6.

If it seems to be getting in the way, you can easily remove it. Although its health may be an issue to you since 7 health on turn 6 is still a lot, instant-kills can negate it.