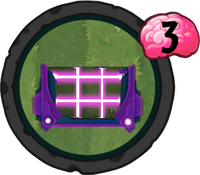 Strikethrough.
Zombies with LASERS. What could possibly go wrong?
Laser Base Alpha is a galactic super-rare zombie environment card in Plants vs. Zombies Heroes and a member of the

to play, and its ability gives all zombies in it the

Strikethrough traits. This ability persists until Laser Base Alpha is removed from the field or overridden by another environment.

Zombies with LASERS. What could possibly go wrong?

Strikethrough. This works powerfully against two tough plants on the same lane as you can destroy both of these plants instantly as well as inflict damage to your opponent. You can play this on a lane with a very strong zombie such as Valkyrie, resulting in that zombie plowing through all plants in front of it on top of doing sufficient damage to your opponent, allowing you to win the battle more easily.

Another way to benefit this environment is playing any zombie whose ability activates when it hurts your opponent, destroys a plant, or does damage in general, such as:

Combining this environment with zombies with

Frenzy like the aforementioned Interstellar Bounty Hunter can be very potent, as they will destroy every plant in the lane as well as damage your opponent, then do 0 to 2 extra bonus attacks depending on the number of plants destroyed, doing a lot of damage to the opposing side.

As this environment gives these two powerful traits, it is not recommended to play zombies that already have

Strikethrough, unless one of these traits are missing and needed for that zombie.

You can play Fireworks Zombie on this if the field is full of powerful plants, as he will destroy all of them with the

Deadly trait. However, beware, as doing this will destroy all of your zombies as well. A similar effect can be achieved by using either Barrel of Deadbeards or Gas Giant. However, the best card that can achieve this effect is Space Ninja or Gizzard Lizard's evolution, due to the fact that he only does damage to all plants, thus not destroying your zombies. Note that the above combos are restricted to Impfinity only unless one of the above cards is Conjured.

Bullseye damage to be done to your opponent. This is because of the fact that

Strikethrough are particularly useful when combined with Kitchen Sink Zombie's

Frenzy traits. However, only Super Brainz and Huge-Gigantacus can do this normally.

Since this is a science card, Interdimensional Zombie's ability can be activated if this gets played. However, only Super Brainz and Huge-Gigantacus can do this normally.

Do not bother playing any plants with high health and low strength to block the damage, as the zombies will just destroy the plant. Using Team-Up plants don't help either, as the

Strikethrough trait hits the plant behind them as well. Instead, using glass cannons like Magnifying Grass will dispose of the zombies much more quickly.

Laser Base Alpha's grayed out card

Laser Base Alpha being overridden by Cone Zone

Being overridden (animated)
Community content is available under CC-BY-SA unless otherwise noted.
Advertisement