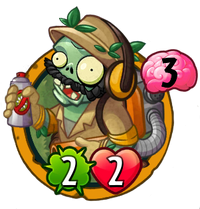 When revealed: A Plant gets -2

.
If barren rock and wilted Plants are what you want, he's the landscaper for the job.
Landscaper is a premium super-rare zombie card in Plants vs. Zombies Heroes, and a member of the

. He has the Gravestone trait, and his ability gives a selected plant -2

If barren rock and wilted Plants are what you want, he's the landscaper for the job.

Landscaper's ability weakens a plant to either make it pose less of a threat to you, or to stop it from attacking entirely, which can save you or your zombies from going down. It can also be used to lower the strength of a plant to 2

or less, thus allowing a plant with up to 4 strength to be destroyed by Rolling Stone or Weed Spray.

If you are able to lower a plant's strength to 0, it gives you a definite edge on that lane since the plant on it can't do anything, and your opponent is unable to play anything on that lane if they lack plants with Team-Up or Evolution. This essentially allows you to play set-up zombies such as Zombie King, Team Mascot, and Aerobics Instructor on that lane with little fear of them being destroyed, unless your opponent either plays tricks to destroy them or boosts the plant's strength back up again.

If you are playing as Neptuna, you can play Firefighter, In-Crypted, or Mixed-Up Gravedigger to reuse Landscaper's ability. The Smash also has access to Secret Agent.

Play multiple threats to force the opponent to consider which plant needs to have its strength reduced. You can also boost back the plant's strength if you are in the

Kabloom class, or Bounce back the plant using Rescue Radish if you are playing as a

It is not recommended to Bounce Landscaper, as he can then be replayed, activating his ability again.