For the version in Plants vs. Zombies Heroes, see Landscaper (PvZH).

The primary weapon of the Landscaper is the Weed Buster. The facts below apply to a fully upgraded weapon.

Reload times are faster than usual after deciding to take his job more seriously and giving it 110% every day.

Before work, he grabbed some extra canisters, increasing his ammo. Good to go! 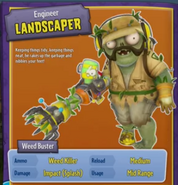 Retrieved from "https://plantsvszombies.fandom.com/wiki/Landscaper?oldid=2023816"
Community content is available under CC-BY-SA unless otherwise noted.