Travels fast at first, but slows down after placing ladder

The ladder cost him two pieces of gold.

Ladder Zombie is the 21st zombie encountered at Adventure Mode in Plants vs. Zombies. He carries a ladder that functions as a shield, similar to Screen Door Zombie's screen door. He moves faster than other zombies while he has his ladder. In addition to functioning as a shield, the Ladder Zombie can also use his ladder to get over the first defensive plant (Wall-nut, Tall-nut, Pumpkin, or an imitated version of said plants) he encounters.

Fume-shrooms, lobber plants, Spikeweeds, Spikerocks, or the backwards projectiles of a Split Pea or Starfruit can kill these zombies while bypassing the protection of the ladder.

Ladder Zombie loses his ladder upon placing it to get over a defensive plant, therefore losing the remainder of the ladder's hit points. Any damage that Ladder Zombie itself sustained (from lobbed projectiles, fumes, Spikeweeds, Spikerocks, or projectiles from behind) remains in place.

Ladder Zombies can be annoying because they can easily get over your defenses, also letting other zombies do so too. However, there are various ways to deal with this zombie. The ladder can be taken away by a Magnet-shroom, even if the ladder was already placed. Instant kills, (Cherry Bombs, Jalapenos, Doom-shrooms, and Cob Cannon cobs) will also destroy the ladders after they are placed. These zombies are also weak to Fume-shrooms, Gloom-shrooms, Spikeweed, Spikerocks, and lobber plants (the lattermost of which will compose the majority of your offense in the roof levels in which the Ladder Zombie appears), as they deal damage directly to the zombie and do not have to destroy the ladder first.

The ladder can also prove to be a weakness to the Ladder Zombie, as Split Peas, Starfruits, and Gloom-shrooms can shoot backwards to damage the zombie directly, making it a good idea to plant them in Pumpkins. This would effectively make the plant invulnerable until an explosive plant or Magnet-shroom is utilized or a Jack-in-the-Box Zombie blows up near it, so you shouldn't use both of these techniques at once (or near each other). Of course, this would not be helpful against Gargantuars or Zombonis.

Ladders are best for a Chomper inside a Pumpkin, since the Chomper will be left untouched (passed over) while still eating zombies. This works especially well if the Chompers are planted on the right side (forefront) of the lawn/roof, but obviously not very well if planted too close to the house. Another useful strategy is to get all plants on the 2, 3, 4 columns(3, 4, 5 columns for roof levels) planted in Pumpkins, and get every Pumpkin placed with a ladder. This will make Imps thrown by Gargantuars or Giga-Gargantuars unable to attack these plants.

Of course, you still need some plants, like Gloom-shrooms to kill these Imps. This strategy is commonly used in Survival: Endless, because it can free players from changing the pumpkins behind and thus they will be able to focus on the front line.

All pumpkins behind are placed with ladders. Imps are not able to hurt any plant and will be killed by Gloom-shrooms. It should also be noted that if he places the ladder on a defensive plant (such as Wall-nut, Tall-nut, etc), the plant can be dug up and replanted to remove the ladder. Although, this is not recommended as defensive plants have a very slow recharge and can cost up to 125 sun. Only do this as a last resort, such as if a Jack-in-the-Box Zombie can climb on it and explode plants towards the inner part of your defenses.

When used properly, Ladder Zombies can quickly overrun rows with large amounts of Peashooters and other similar plants. You should consider using Ladder Zombies instead of Bungee Zombies to render useless Wall-nuts or Tall-nuts, rather than send plenty of zombies to get over the defensive plants. However, don't use them near Magnet-shrooms, as they will remove or steal the ladder.

If there are no defensive plants in a row, they can be a usable substitute for the Screen Door Zombie, with a shield to protect against the freezing effects of Snow Peas, and faster movement to compensate for the lower health. Above everything, avoid placing Ladder Zombies in rows with Kernel-pults, Spikeweeds, or Fume-shrooms, as they will die quickly from the direct damage. Usually when Snow Peas are around, they work better than Football Zombies, being fairly cost-effective (150 sun for Ladder vs. 175 sun for Football).

To be extremely economical, a Ladder Zombie can also pair up with another low health Zombie, for example Pole Vaulting Zombie. When the Ladder at hand degrades for the second time, send off the Pole Vaulter to quickly catch up the battlefront, who either sacrificially absorbs damage and saves the Ladder Zombie, or ends up surviving (typically benefited from vaulting over one plant) and finishes the row. This strategy is meant to reduce the cost (down to 225 sun or so) for the row of interest.

Ladders placed on Tall-nuts and Pumpkins

Ladder Zombie with his bone sticking out of his arm due to a glitch.

Ladder Zombie without his arm

Ladder Zombie without his ladder

Ladder Zombie without his arm and ladder

Ladder Zombie in the Suburban Almanac 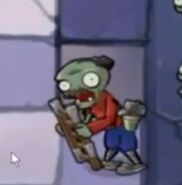 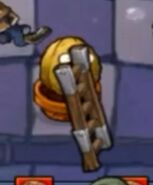 His ladder on Wall-Nut

Plants vs. Zombies: All Stars  (China only)  (Archived content) 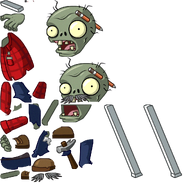