Kunai Tupistra pop up from the ground to damage nearby zombies.

Kunai Tupistra is able to destroy rolling obstacles when hiding

Kunai Tupistra is recognized as as one of the best ninjas in the industry, but most will argue that Auberninja is a far better ninja, Kunai Tupistra doesn't really care much honestly, and recognizes that both sides utilize completely different methods of attack. Kunai Tupistra is more about hiding in the shadows to secure a safer retreat.

Kunai Tupistra (潜行开口箭; pinyin: qiánxíng kāikǒujiàn) is a plant in Chinese version of Plants vs. Zombies 2 introduced in the 2.6.0. update as an unlockable plant for the Heian Age world.

When underground, Kunai Tupistra will not be able to be attacked by zombies entering its tile, thus, zombies will simply walk over it until it reemerges. A hiding Kunai Tupistra is also able to destroy rolling objects like a Spikeweed, but will also be destroyed in the process.

Kunai Tupistra is based on the Tupistra chinensis, a species in the genus Tupistra, which is widespread in Taiwan and in southeastern China.

Kunai Tupistra's leaf blades are based on the kunai, which are Japanese blades traditionally used as masonry trowels, but are more commonly known through their use as throwing blades typically associated with ninjas.

When given Plant Food, Kunai Tupistra will jump out of the ground and throw multiple leaf blades around it in a 3x3 area, all zombies in this area will be heavily damaged.

Kunai Tupistra has good defenses against both armored and strong zombies, as it can take them out with no problem. Unfortunately, the player must prevent it from being eaten alive if the zombies try to attack it during its attacking phase. Otherwise it'll have a weaker health after being bitten for few times by a zombie. But just like Spikeweed and Spikerock, it also can be used to destroy rolling objects, such as barrels and pianos.

A good zombie that need to take care of is Knight Zombie. Kunai Tupistra can damage him as quickly as possible, well at least if there are two of them in one single lane. Planting Sweet Potatos both above or under its lane might attract few zombies and force to eat them instead, and Kunai Tupistra now has more chance to reload its kunai leaves much quicker.

Combine it with Celery Stalker for a good combo to defend yourself against stronger zombies. Just put a single Celery Stalker between two Kunai Tupistras and you're good to go. But it is only recommended to use this phase only when Kunai Tupistra hides underground while avoiding any zombies. If a zombie passes it, then they get attacked by Celery Stalker. 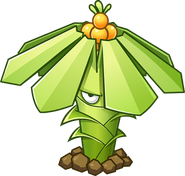 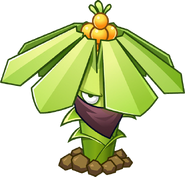 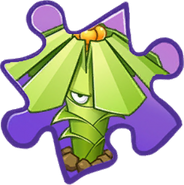 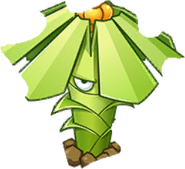 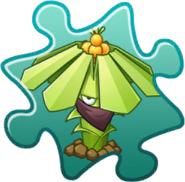 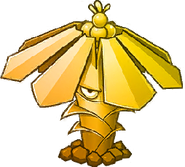 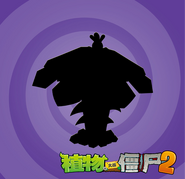 Another silhouette teaser of Kunai Tupistra along with Ultomato, Dollarweed Drummer, Shadow Fanilla, and a silhouette of Gumnut 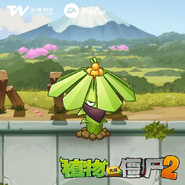 Appearance reveal at the end of the Steam Ages trailer

Kunai Tupistra on a News Banner