Pre-existed: One
Max no.: One

Plan your defense and defeat the zombies
Kongfu World - Ultimate Challenge is the 25th and final level of Kongfu World in the Chinese version of Plants vs. Zombies 2. Being a boss battle, the player is forced to defeat the Blade-Wielding Hero to complete the level. The player has to collect all stars in previous levels in order to unlock this level. When this level is finished for the first time, the player earns coins, a Magical Chest and three stars.

(Crazy Dave appears)
Crazy Dave: Here again opens the prologue of the ultimate challenge.
Crazy Dave: Wait, why is it again?
(Penny appears)
Penny: I believe it wasn't the slip of your tongue.
Penny: Start it soon, before the player can't wait any longer.
Crazy Dave: Hey, is that strange guy our opponent?
Penny: Don't be nonsense, he could have eaten the tacos in the opposite room.
Crazy Dave: Oh, tacos I'm coming!
(Crazy Dave and Penny leave)

Plants needed (should be at least at

Just like what the name of the strategy says, the main focus of this is to revive Lava Guava using Intensive Carrot. Gold Bloom is your main sun producer as you can plant them during the setup. Power Lily is your only source of Plant Food (other than from the only Taiji tile in the level). Everything else are for attacking. Pepper-pult is used for the splash damage. Homing Thistle is for homing onto dangerous zombies, especially on those on lanes that don't have the minecart. Aspiragus is for damaging Blade-Wielding Hero with its range. And Magic-shroom is for spawning allies as a distraction to Blade-Wielding Hero.

The result after beating the level. 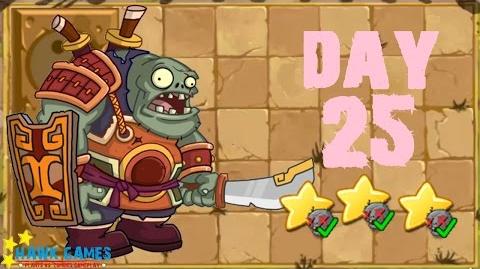 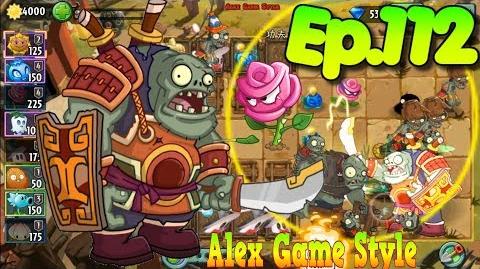 Retrieved from "https://plantsvszombies.fandom.com/wiki/Kongfu_World_-_Ultimate_Challenge?oldid=2164985"
Community content is available under CC-BY-SA unless otherwise noted.