Kongfu World - Day 19 is the 19th level of Kongfu World in the Chinese version of Plants vs. Zombies 2. It is a Last Stand and Locked and Loaded level. The player is given with five plants along with only 350 sun and 1 Plant Food to set up their defense. When this level is finished for the first time, the player gets coins.

Last Stand and Locked and Loaded

Plan your denfense and defeat the zombies
In the Normal mode of this level, the player has to plan their defenses with the plants given so they can the beat Kongfu Zombies at Level 1.

350 sun is extremely little for a proper defense, not to mention that the plants given are very weak, except for Fire Gourd, while the hordes of zombies in this level are nearly equal to the previous level. Even though the player is still given with Twin Sunflower to farm sun and set up a more proper defense later then, the black holes will start sucking the defenses in, and the Weapon Stands will continously throw out many plants instantly including the Radish. The player is forced to continously set up their defenses and replace destroyed ones with new ones. 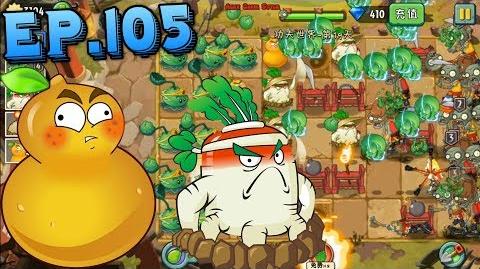 Last Stand and Locked and Loaded

Survive the zombie attack with the given plants
In the Hard mode of this level, the player has to plan their defenses with the plants given to beat the zombies at Levels 2-3, along with no lawn mowers.

Retrieved from "https://plantsvszombies.fandom.com/wiki/Kongfu_World_-_Day_19?oldid=2178761"
Community content is available under CC-BY-SA unless otherwise noted.