Plants vs. Zombies Wiki
Register
Don't have an account?
Sign In
Advertisement
in: China exclusive, Archived, Kongfu World,
and 7 more

A money bag
Kongfu World - Day 16 was the 16th level of Kongfu World in the Chinese version of Plants vs. Zombies 2. It was also the first boss level of the world, and the boss in question was the Gunpowder Devil. Being a boss battle, the player was forced to beat the boss in order to win the level. When this level was finished for the first time, the player received a star and unlocked a set of Bronze Matrix Brain Buster levels.

The Gunpowder Devil calls these zombies during these respective phases:

Gunpowder Devil's replacement for the charge attack is an attack that will vaporize the player's plants by bombing them in a 3x3 radius. To counter this, the target plant that the bomb is headed to should be dug up. This also counts as its targeting attack. 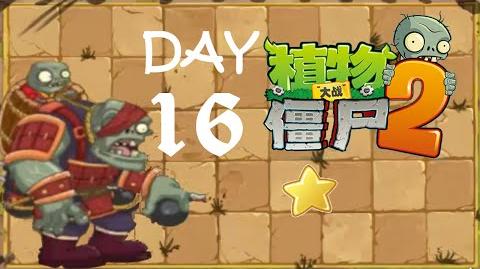