For the world with the same name in Plants vs. Zombies: All Stars, see Kongfu World. 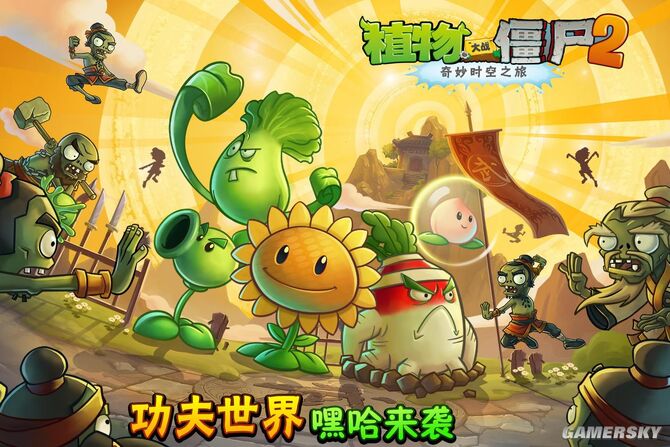 Kongfu World (功夫世界; pinyin: Gōngfu Shìjiè) is the 4th world in the Chinese version of Plants vs. Zombies 2 and the first Chinese-exclusive one. The world is based on China, a country that establishes the martial arts known as "Kung-Fu." It is home to Chinese zombies who have acquired skills in martial arts. The stage elements of this world are Taiji Tiles and Weapon Stands. Taiji Tiles give additional Plant Food when planted on. There are four new plants that will be added to the player's arsenal and twenty-three new zombies to fight.

This is the year 1673, a Shaolin Kongfu world. Kongfu plants versus Kongfu zombies, are you ready?

The boss debuts! The blustering Blade-Wielding Hero and Gunpowder Devil are here, can you beat them and finally save Kongfu World?

This is a medium world. It presents a difficulty spike for new players due to the unique wave of zombies and black hole gimmick in its Last Stand levels as well as the new mechanics in Bronze Matrix levels with its Gargantuar Bronzes. The other levels are not too bad as the zombies are only of moderate threats. The boss level, however, can be hard compared to most of the other bosses due to its powerful attacks. Overall Kongfu World is only slightly harder than Wild West and Far Future.


^Zombies that only appear via weapon stands.

I think I've seen that cloud before.
The content in this section is archived. What it describes is not available anymore..

Powder Keg is Kongfu World's Brain Buster. The main objective is to prevent the fuses from being lit by the Torch Zombies through the use of ice-related plants. The game ends when the player successfully stopped a zombie horde or when all the powder kegs blow up.

Last Stand makes a return in this game. The player is given high amounts of sun and time to plan their defenses. As always, the player can either trigger the onslaught immediately or when he or she is ready. There are eight levels all in all in this world. Four are played during gameplay, three are optional Brain Busters, and one consists of a combination of this and Locked and Loaded. The boss battles of this world are Last Stand levels with the exception of having sun-producing plants at player's disposal rather than being in a form of conveyor-belt level, which is traditional. On some levels, black holes will appear after a set of waves to remove the plants from the lawn.

Bronze Matrix is the second exclusive Brain Buster in this world. The objective here is to defeat all the zombies, including the Gargantuar Bronzes, which are formerly bronze statues. A time limit will be given to the player and if the time runs out, Gargantuar Bronzes will suddenly break free from petrification. Also, the level is challenging enough because there is the absence of all the lawn-mowers for last resort purposes, making the player be more dependent on the plants provided to him or her via conveyor-belt.