Choose a lane. Destroy all plants there with 3

or less.
No one knows where the giant green hand and the giant purple hand comes from. What will happen when they clap?
Knockout is a triassic super-rare zombie trick card in Plants vs. Zombies Heroes and a member of the

to play, and its ability instantly destroys all plants with 3

or less on a selected lane. Its closest plant counterpart is Whack-a-Zombie.

The word "knockout" means an act of literally knocking someone out, especially in boxing.

Its description references the fact that the hand in this trick is disembodied and appears out of nowhere.

No one knows where the giant green hand and the giant purple hand comes from. What will happen when they clap?

Knockout is a more expensive, yet stronger version of Rolling Stone, as not only can this destroy a larger pool of plants, but two of them at once. Just like Rolling Stone, Knockout is good at ruining nut decks, but it is also useful against any annoying 3

plants like Power Flower and Briar Rose, as well as any Three-Nut/Loco Coco decks.

For plants with enough strength to evade Knockout's ability, you can use strength-reducing cards like Landscaper, Shrink Ray (as Rustbolt), or Alien Ooze (as The Smash) so they do get vulnerable to Knockout. However, Rustbolt is better off playing Rocket Science instead. If your opponent attempts to spread out their plants, you can play moving cards like Sumo Wrestler or Terrify to group them onto a single lane and then destroy both at once, assuming the plant you are moving has Team-Up. Black Hole is especially useful with this trick, since it reduces strength and moves plants at the same time.

Knockout can also be used to activate Paparazzi Zombie, Mad Chemist, and Trick-or-Treater's ability since it is a trick, but only Rustbolt can do this normally. Also, be warned that it will be penalized by Black-Eyed Pea and Sportacus, while Forget-Me-Nuts, Brainana, and Dark Matter Dragonfruit can delay or prevent the use of Knockout.

The only downside of Knockout is that it only affects one lane. Therefore, you will have trouble when your opponent starts overwhelming you with lots of 3

plants on the field, as you can only carry four Knockouts in your deck, and even then, you can't guarantee you will get them just when you need one. Knockout also costs 3

, so you cannot do anything against any meddlesome setup plants in the very early rounds, whereas Rolling Stone can.

Knockout's existence alone is a threat, since it can destroy plants that are immune to Rolling Stone and Weed Spray. While you can simply boost your plants' strength to avoid Knockout's impact, Rustbolt is a different story, since he has access to Rocket Science, allowing him destroy any plant regardless of strength for 3 brains.

Mega-Grow heroes can deal with Knockout easily by having Umbrella Leaf protect your plants, but Umbrella Leaf herself is vulnerable to Knockout, so it is recommended to have two of them protect each other. But the

Guardian class, whose main tribe is very vulnerable to Knockout, cannot use Umbrella Leaf with the exception of Grass Knuckles. In that case, you can play moving cards like Gardening Gloves, Ensign Uproot (as Beta-Carrotina), and Bubble Up to move any plants with 3

or less to another lane, but beware of your opponent's moving tricks or Black Hole as they can move your plants back.

Black-Eyed Pea and Sportacus can punish your opponent for playing Knockout, but they themselves are also destroyable by Knockout, so you should attempt to boost their strength. Or, you can use Forget-Me-Nuts, Brainana, and Dark Matter Dragonfruit as they can increase the cost of this trick or prevent your opponent from playing it. 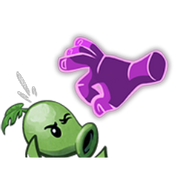 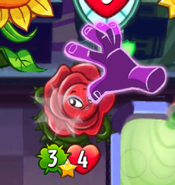