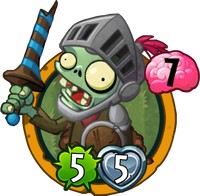 For the similar zombie in Plants vs. Zombies 2, see Knight Zombie.

Knight of the Living Dead

None
He's both secretary and treasurer for the Knights of the Square Table.
Knight of the Living Dead is a premium rare zombie card in Plants vs. Zombies Heroes and a member of the

Hearty class. He can also be transformed by Zombie King. He costs 7

Armored 2 trait and does not have any abilities.

He is based on Knight Zombie in Plants vs. Zombies 2. But in this game, he also holds a broken lance and a tiny shield. Overall, Knight of the Living Dead bears more resemblance to Cavalry Zombie (who also holds a lance).

His name is a portmanteau of "knight," the real-life position he is based on, and "Night of the Living Dead," a novelty horror movie made in 1968 that features zombies.

His description makes a pun on the Knights of the Round Table, King Arthur's famed table in the Arthurian legend, while his old description emphasizes the word "knight" in his name to make a pun.

The lance he holds is a reference to jousting, a sport that existed since the Middle Ages. This explains why he is in the sports tribe.

He's both secretary and treasurer for the Knights of the Square Table.

Armored 2 trait, watering down even the strongest of plants and tricks and surviving (with Gravitree being the only exception without transforming Knight of the Living Dead), and straight out nullifying everything that does 2 damage or less at once: Pair of Pears (and Pear Pal), Sunburn, Mush-Boom, Power Pummel, Hot Lava, Moonbean, and Spikeweed Sector, to name a few. Knight of the Living Dead will be a big threat with the help of stat boosts and additional traits. Sports synergy with Team Mascot and Zombie Coach also helps, as they both benefit Knight of the Living Dead.

While his stats are low for his cost, his

Armored 2 trait makes him very hard to destroy with brute force. The best answer would be to use instant-kill cards like Squash, Winter Squash, and Briar Rose, being able to bypass the

Armored trait. Of course, a transforming card also helps, but these options are limited. If instant-kills are unavailable, the second best option would be to use a Bouncing card such as Jumping Bean, Jelly Bean (Evolved), or Spring Bean. Since he costs so much and does not have a "When played" ability, your opponent will likely not replay him in favor of another zombie. Watch out for Rustbolt, though; since he can get extra brains very easily, Bouncing Knight of the Living dead will have little impact if he manages to do that.

As for using plants, very few will be able to remove him, or at least cause an exchange. The best plant to use would be Gravitree, as it can destroy him in one attack and survive at the same time; while other plants like Magnifying Grass and Super-Phat Beets can be used too, they have to rely on their abilities. If your plant needs an extra turn to destroy him, just

Freeze him with whatever card available.

Retrieved from "https://plantsvszombies.fandom.com/wiki/Knight_of_the_Living_Dead?oldid=2298643"
Community content is available under CC-BY-SA unless otherwise noted.