Kitty Sparkles is guarded by a Night Cap and a couple of Hypno-Shrooms, which can be a problem as she is able to turn them invincible with her healing ability (indicated by the rainbow effect). It is recommended to use the 80s Action Hero and use his abilities to defeat her. Rocket Ride allows you to deal a massive amount of damage quickly and easily, as she will not move that frequently and prefers to stay inside the base, and Can't-Miss-ile is able to further weaken her. A fully-charged bow attack can also be used to take down the Night Cap in one hit when she is not invincible, and to an extent, the Hypno-Shrooms. 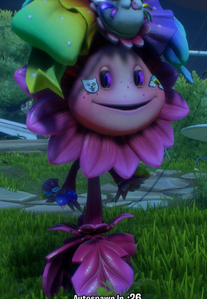