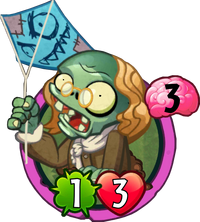 When this does damage, draw a card.
The naysayers were right. Flying a kite in a lightning storm WAS a real bright idea.
Kite Flyer is a premium rare zombie card in Plants vs. Zombies Heroes and a member of the

. He has the Gravestone trait, and his ability draws a card every time he does damage.

He is based on Benjamin Franklin, a Founding Father of America, and his kite experiment, hence his history and science tribes.

His name is a combination of the words "kite," the object he is holding, and "flyer," referring to his appearance.

His description mentions naysayers, which are people who express negative or pessimistic views.

The naysayers were right. Flying a kite in a lightning storm WAS a real bright idea.

zombie, Kite Flyer is not that powerful statwise. However, his true value comes from his ability, which allows him to draw a card every time he hurts something, whether it be a plant or the plant hero. Not only that, Kite Flyer is able to constantly draw cards until he is destroyed, so you do not have to worry about running out of them with him around. This makes Kite Flyer compatible in almost any deck, especially Dino-Roar decks.

Since Kite Flyer's ability activates every time he hurts a target, you should aim for him attacking as many times and hurting as many plants (or your opponent) as possible before he goes down. Letting him do bonus attacks with Lurch for Lunch, Electrician, or Gadget Scientist increases the number of attacks he does, while giving him

Strikethrough lets him hurt more plants per attack. However, improving his overall survivability is important too, perhaps even more so than the former. Rustbolt and Immorticia would do the best job on that part since both have health-boosting cards and strength-degrading cards: Rustbolt is better in terms of boosting his survivability due to his health-boosting cards and strength-degrading cards being cheaper and more cost-effective, while Immorticia makes Kite Flyer hit hard as well. Super Brainz and Huge-Gigantacus can use Headstone Carver to give him a slight stat boost, move him onto a safe lane with Smoke Bomb, or

Freeze plants to let Kite Flyer safely attack them once, but they don't contribute as much as Rustbolt or Immorticia does defensively.

Kite Flyer can also benefit from science synergy with Gadget Scientist, which lets him do a bonus attack and draw an extra card, and Zombot Drone Engineer, which makes him hit harder every time he does damage. And while it does not benefit Kite Flyer himself, he can activate Interdimensional Zombie's ability, though there are better and cheaper science cards for the job.

But just like any Gravestone zombie, you should watch out for Grave Buster.

Armored plants also stop Kite Flyer cold if you don't have strength-boosting cards. Since both of them are exclusive to the

Guardian class, you should be especially wary against Guardian heroes.

Kite Flyer's ability allows your opponent to play more cards and stick to their strategies more easily by continuously supplying cards, making him a threat. But fortunately, he doesn't hit hard or have much health, and given how many cheap options there are that can take down an unboosted Kite Flyer (Berry Blast, Bonk Choy, Grave Buster, etc.), he shouldn't be that hard to counter. 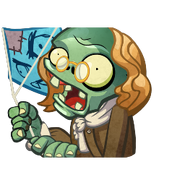 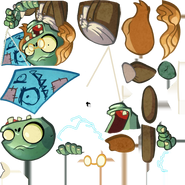 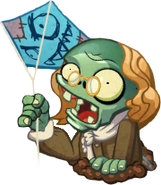 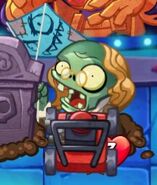 Lawnmower being used on Kite Flyer

Shamrocket being used on Kite Flyer

Kite Flyer while Pecanolith is on the field 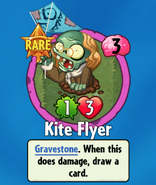 The player receiving Kite Flyer from a Premium Pack