None
He's got everything but the - no wait, he's got that too.
Kitchen Sink Zombie is an event zombie card in Plants vs. Zombies Heroes and a member of the

Anti-Hero 3 traits but does not have any abilities.

He was added in update 1.16.10, along with Forget-Me-Nuts, Atomic Bombegranate, Zombology Teacher, Thinking Cap, Bad Moon Rising, and Imp-Throwing Imp.

His name is a combination of "kitchen sink," the real-life object he is holding, and "zombie," referring to what he is. The fact that he appears to be a Plumber references the fact that plumbers fix pipes and therefore are often used to fix sinks.

His description references the idiom "everything but the kitchen sink," meaning everything imaginable, due to his numerous traits and his sprite also featuring the titular sink

He's got everything but the - no wait, he's got that too.

While this card seems to have many traits at random, this zombie is made to do huge damage to your opponent while surviving longer with

Bullseye traits make a perfect combo to destroy 3 health plants and do 6 unblockable damage to your opponent. And lastly, his

Overshoot 2 trait ensures that you are guaranteed 2 unblockable damage to your opponent every turn of combat.

However, keep in mind that his

Overshoot 2 trait does not team up with

Anti-Hero 3. Being in the Brainy class, all Brainy heroes can use either Teleport or Teleportation Zombie to play him on an empty lane without being countered and to do an insane amount of damage, or use Cryo-Brain to play him faster.

Each Brainy hero also has their own way of using this zombie well:

Kitchen Sink Zombie is a threat due to his many traits that synergize well with each other. If you leave him alone, he will do a lot of damage to you with his

Anti-Hero 3 traits. If you try to block his attacks with weak plants, he'll just plow through them with his

Frenzy trait. He also has the

Armored 1 trait, which allows him to resist most attacks.

However, keep in mind that you can destroy him with instant-kill cards such as Squash or Whack-a-Zombie. Tactical Cuke also works if Kitchen Sink Zombie is on the ground, but remember that it will wipe out your plants on ground lanes too.

If Kitchen Sink Zombie gets the

Untrickable trait via Parasol Zombie, use plants with instant-kill abilities like Chomper, Eyespore (if the plant hero has enough sun to immediately play another plant on eyespore), Toadstool, or Briar Rose (a flower is needed as a bait to trigger her instant-kill ability). However, those are only options for a

If you cannot play instant-kills, try to play high-health plants to stall him, or boost a plant's strength so it can destroy this zombie in one attack, but you will have to take some

Freezing, but it is a more reliable option and can activate Winter Squash's ability. You can also Bounce him, since he is quite expensive to play. 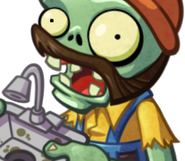 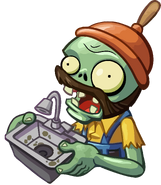 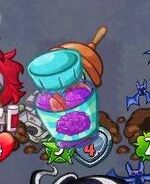 Barrel of Barrels being played on Kitchen Sink Zombie

Kitchen Sink Zombie being the featured card in the menu for the August 6th, 2017 Daily Challenge

Kitchen Sink Zombie being the featured card in the menu for the August 13rd, 2017 Daily Challenge

Kitchen Sink Zombie about to do an 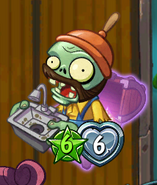