Launches a rolling Bearberry shell to attack a row of zombies.

Kinnikannon has never been on the front line. As a matter of fact, during inspection his jammed cannon labeled him unqualified.

Kinnikannon (熊果臼炮; pinyin: Xióng guǒ jiù pào) is a plant from Renaissance Age in the Chinese version of Plants vs. Zombies 2. He attacks by launching a Bearberry on the ground, the bearberry rolls on the ground dealing damage to every zombie on the row it was launched in. The bearberries launched will not continue rolling when it hits a Marble Mound or a Statue.

Kinnikannon is based on the Bearberry, a species of dwarf shrubs found in Arctic and Subarctic North America, Asia and Europe.

His name is a portmanteau of "Kinnikinnick", a mixture of various tobacco and herbs often including Bearberries, and "Cannon", referencing his abilities and appearance.

When fed with Plant Food, Kinnikannon launches three larger bearberries: one on its lane, one diagonally upward and one diagonally downward. They remove most zombies out of the lawn, but only deal damage to Gargantuars and machines.

The larger bearberries are now on fire, dealing more damage to machines and Gargantuars.

Kinnikannon was a good choice to defend yourself against a huge wave of zombies, but you must be careful with marble mounds or statues if they're on the lawn, since the boulder that launched by him will stop and damage the statue frequently. He also can be used in either Neon Mixtape Tour or Jurassic Marsh, since most of the levels have zombies that were hard to defeat or maybe the level itself was hard. Punk Zombies, MC Zom-B, Hair Metal Gargantuars, and Breakdancer Zombies are the only good zombies that need to take care of during a huge wave of zombies. Combine this along with Wasabi Whip, this combo allow to defeat zombies much quicker than usual. 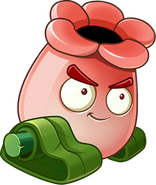 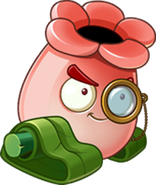 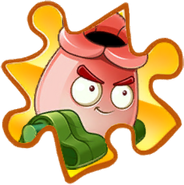 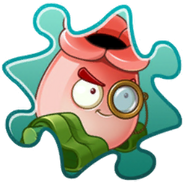 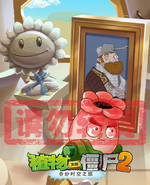 Kinnikannon on a Gold tile

Seed packet texture
Add a photo to this gallery
Retrieved from "https://plantsvszombies.fandom.com/wiki/Kinnikannon?oldid=2360882"
Community content is available under CC-BY-SA unless otherwise noted.