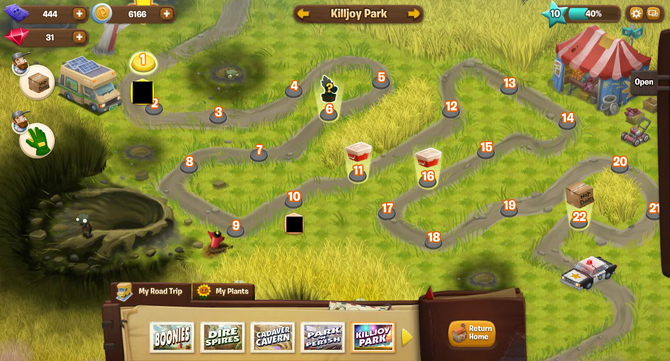 Reclaim The Post Office Lot and travel with 3 friends
Killjoy Park was the fifth stage in Plants vs. Zombies Adventures. It resembled a firework park. It introduced the Rocket Zombie to the player. The player had to complete Level 22 in order to get "Not Dave's Box." After completing Level 6 of Killjoy Park, the player got three free Ice Queen Peas, and the Ice Queen Pea became available to buy with gems. At the end of this map, Officer Ron asked the player to carpool with three friends, or hire three for 180 gems.

The word "killjoy" means that things are harmful in some ways, and are wonderful when handled safely. "Killjoy" may also be a reference to the TV series of the same name.

Killjoy Park happened to be a firework park. Various craters and other blackened areas were most likely formed by improper use of the rockets, possibly by the zombies using them. A cornfield was present at the bottom left and the statue, the Zombie Fireworks Sign, was present in the right. This area may have been located somewhere in the Great Plains of the United States, where agriculture and vast land was abundant.