When played: For each Zombie, this gets +1

and Heal the Plant Hero for 1.
Catchup mechanics help you get back in a game when you're behind. Ketchup Mechanics fix your fruit.
Ketchup Mechanic is an event plant card in Plants vs. Zombies Heroes and a member of the

and heals the plant hero for 1

for every non-gravestone zombie on the field when she is played.

She is based on the tomato (Solanum Iycopersicum), the fruit of a plant in the nightshade family; and a mechanic, a person who repairs and maintains machinery.

Her name is a portmanteau of "ketchup," a condiment made from the real-life plant she is based on; and "mechanic," referring to her appearance, as well as catch-up mechanics, which are game rules designed for losing players to catch up with ease, which in this case is exactly what she is intended for.

Catchup mechanics help you get back in a game when you're behind. Ketchup Mechanics fix your fruit.

Ketchup Mechanic is best played when the field is filled with zombies, as she gets +1

for each zombie on the field. Due to this, she can be boosted up to +5

, allowing her to plow through zombies easily. Just make sure that Sneezing Zombie is not on board (she disables all types of healing), and do not play her in Total Eclipse (as it will destroy her instantly)

Chompzilla can use her to boost Potted Powerhouse, or raise her poor initial stats with Onion Rings, allowing her to have up to 9/9.

You can also abuse Heartichoke to do up to 5 damage to the zombie hero and even trigger Pepper M.D.'s ability once, giving him a stat boost.

Avoid playing her when there are no zombies or gravestones, as she needs the boost to become worthwhile, and gravestones don't count toward her ability.

Tricks are the best way to counter her, as unless you play Teleport, Ketchup Mechanic will still get +1

. If she gets out of hand due to being played when there are a lot of zombies on field, Rocket Science and Cut Down to Size can get rid of her easily. But in other cases, your opponent will hold on until you get more zombies on the field, which will likely happen in the late game anyway so be prepared to destroy her. Rush and swarm strategies are far more vulnerable to this plant if you had too many fighters on the field.

As for the healing ability, Beastly Heroes can use Sneezing Zombie to prevent it. 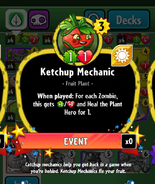 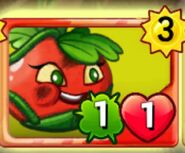 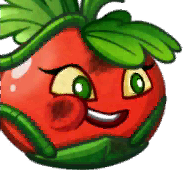 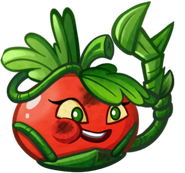 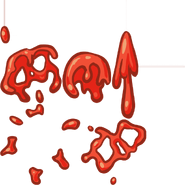 Time to Shine being played on Ketchup Mechanic 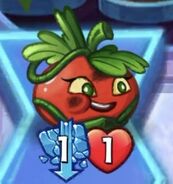 Ketchup Mechanic with the

Ketchup Mechanic on an Advertisement for the Early Access Bundle

Ketchup Mechanic on an Advertisement for the Early Access Bundle

Ketchup Mechanic being the featured card on the menu for the September 12th, 2017 Daily Challenge

Ketchup Mechanic being the featured card on the menu for the September 16th, 2017 Daily Challenge

Ketchup Mechanic on an advertisement for the Early Access Bundle

Ketchup Mechanic on the advertisement for the Weekly Events