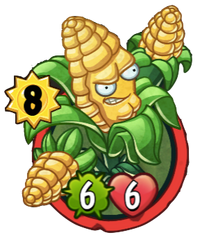 When played: Do 4 damage to each Zombie.
What he lacks in a sense of humor, he makes up with attitude... and dual Cob Busters.
Kernel Corn is a premium legendary plant card in Plants vs. Zombies Heroes and a member of the

. He does not have any traits, and his ability does 4 damage to every zombie on the field when he is played.

He is based on the plant class in Plants vs. Zombies: Garden Warfare 2 with the same name and appearance.

What he lacks in a sense of humor, he makes up with attitude... and dual Cob Busters.

Doing 4 damage to every single zombie on the field, Kernel Corn is a complete upgrade to Sour Grapes, and Cherry Bomb as well if there is an empty lane to play him.

When your opponent attempts to swarm you with zombies, play Kernel Corn to wipe out or severely damage your opponent's zombies for himself and your other plants to finish off the weakened ones and hit your opponent.

However, despite him already having good raw stats, Kernel Corn is not as good at handling single threats on his own, so he becomes less effective if your opponent focuses on investing on a single zombie. He also has a hard time when your opponent fills the field with tougher zombies, such as Valkyrie, so you should be careful about when you should play him.

You should also watch out for instant-kill tricks like Locust Swarm, Cut Down to Size, or Rocket Science, as well as

Kernel Corn is a very dangerous plant, as he can demolish your defenses and your hero alike. Try playing instant-kill tricks such as Locust Swarm, Cut Down to Size, or Rocket Science, or

Deadly zombies to get rid of this plant.

If his ability is what you fear the most, having either high-health or

Armored zombies on the field lessens the harm. If you want your zombies to be unaffected by his ability, you can play Gravestone zombies or Mixed-Up Gravedigger, or sneak some in with Teleport.

It is strongly recommended not to Bounce this plant because your opponent can replay him again, possibly wreaking havoc once again on your already-weakened defenses.

Retrieved from "https://plantsvszombies.fandom.com/wiki/Kernel_Corn_(PvZH)?oldid=2334849"
Community content is available under CC-BY-SA unless otherwise noted.