Great attacker who is dangerous at all distances. Highly lethal with Shuck Shot, or can reveal enemy positions with Butter beacon.

Kernel Corn is a playable plant class in Plants vs. Zombies: Battle for Neighborville. He is an

Great attacker who is dangerous at all distances. Highly lethal with Shuck Shot, or can reveal enemy positions with Butter beacon.

If Kernel Corn has the Shogun-Guard legendary upgrade equipped, Kernel Corn's primary weapon is replaced with the Shogun-Guard, which fires small projectiles that deal 11.25 damage per shot (13 critical) and fires at a rate of 300 RPM (rounds per minute). He can unload 25 projectiles before needing to reload. In addition, Kernel Corn gains a personal shield that covers the top half of his body. The shield has 75 HP and can be activated by aiming down sights.

Kernel Corn is a front line attacker, so make sure your in the battle first. If you’re playing Turf Takeover, and there are a lot of enemies in the area, throw a Butter Beacon to weaken them and reveal their positions. You can also use Butter Beacon to see how many enemies are in an area to improve your attack plan-keep in mind that enemies know when they have been detected. If you see a lot of enemies in a tight group, use Shuck Shot against them, but be smart about it-it is simple for an enemy to sprint away from your attack. Kernel Corn isn't the best plant when it comes to chasing enemies, and is useless when enemies are in pursuit of Kernel Corn. Try to attack sprinting enemies, slowing them down, then use Husk Hop to get close to them/attack them.

The best strategy is to attack Kernel Corn from a distance so that he cannot use the lethal Husk Hop ability, If he fires Shuck Shots at you, they will be easier to dodge from a distance. 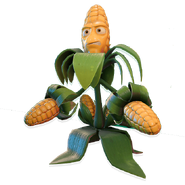 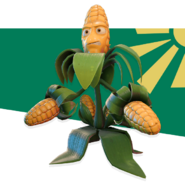 The Legendary "Blade of the Beetle" costume, exclusive for Valenbrainz 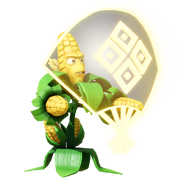 The icon for Kernel Corn's Legendary Upgrade: Shogun-Guard
Add a photo to this gallery

Retrieved from "https://plantsvszombies.fandom.com/wiki/Kernel_Corn_(PvZ:_BfN)?oldid=2288948"
Community content is available under CC-BY-SA unless otherwise noted.