For other uses, see Kernel-pult (disambiguation).

After beating Level 5-2
Kernel-pult is the eldest of the Pult brothers. Of the three of them, Kernel is the only one who consistently remembers the others' birthdays. He bugs them about it a little, too.

Kernel-pult is an offensive lobbed-shot plant in Plants vs. Zombies. While he normally lobs kernels that deal 20 damage per shot at an equal rate to Cabbage-pult, he has a 25% chance to fire a butter projectile that deals 40 damage per shot to his target, briefly stunning it in most cases.

Kernel-pult is unlocked after completing Level 5-2. His butter attack can stun the target for 5 seconds. Two Kernel-pults placed adjacent to another horizontally can be upgraded into a Cob Cannon.

Kernel-pult is a rather fickle plant, as his performance is highly inconsistent and heavily dependent on the random number generator. While his damage per second potential is normally ranked amongst the lowest in the player's arsenal, his butter attack can prove to be highly devastating against high-health target, especially when Kernel-pult is aided by other more powerful offensive plants. Therefore, Kernel-pult will find most of his use as an early- to mid-game support plant to bolster others' performance, rather than a conventional offensive plant, so this is best used for support more than anything else.

Certain plants with limited attack radius, such as Spikerock, Spikeweed, and Chomper (for inedible zombies) will benefit significantly from Kernel-pult. The latter's stunning effect can occasionally stun zombies and force them to stay on the former's attack range for a longer amount of time and allow these plants to deal more damage.

Kernel-pult is highly important in the Roof levels, as the incline of the Roof will upset the firing of peas, spores, etc. He can also bypass Screen Door Zombies' and Ladder Zombies' shield and hurt them directly, as well as hit submerged Snorkel Zombies.

Because of the inconsistency of butter throwing frequency, it is easy to misjudge the power of a Kernel-pult in I, Zombie. One Kernel-pult near the back could prove to be very hard to deal with, especially if Digger Zombies cannot eat him. Consider either doubling up zombies or using a stronger one (Football Zombie, Dancing Zombie, Buckethead Zombie) instead in rows with Kernel-pults. In rows with more than one Kernel-pult, Digger Zombies and Bungee Zombies should be considered, instead of a head-on assault.

Kernel-pult seed packet in the iOS and Android versions

A stick of butter

A Kernel-pult about to lob butter

Another HD Kernel-pult (note the eyebrows and basket are gone)

Zombies with butter on their heads

A Kernel-pult after throwing a kernel

A left-facing Kernel-pult in Zen Garden 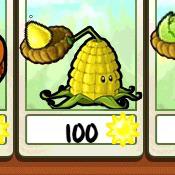 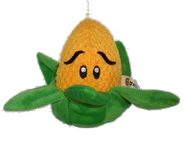 The plush
Add a photo to this gallery